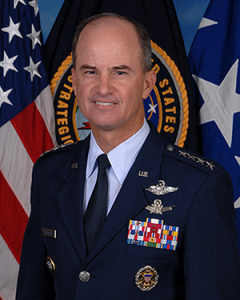 The UW Tech Policy Lab will welcome General Kevin Chilton, retired head of U.S. Strategic Command, to campus next week as part of its Distinguished Lecture Series. General Chilton will address the topic “Deterrence in the 21st Century: From Nuclear, to Space, to Cyberspace.”

General Chilton served for nearly 35 years as a member of the U.S. Air Force. As Commander of U.S. Strategic Command from 2007 until his retirement in 2011, he directed planning and operations for U.S. forces engaged in strategic deterrence and Department of Defense space and cyberspace operations. Before that, General Chilton was the head of Air Force Space Command and spent 11 years with NASA, where he served as a Command Astronaut Pilot and completed three Space Shuttle missions.

The lecture will be held on Tuesday, April 19 at 7:00 pm in the UW’s Kane Hall. Admission is free but advance registration is encouraged. Learn more and RSVP here.