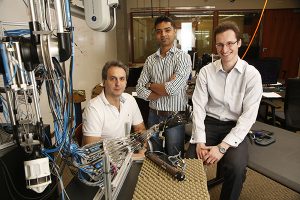 Researchers in UW’s Movement Control Laboratory have built a dexterous robot hand that learns from experience, enabling it not only to perform tasks that are typically challenging for robots, but also improve its performance without human intervention. In contrast to a typical robotics application in which each individual movement must be programmed, the autonomous learning system developed by CSE Ph.D. student Vikash Kumar, CSE and Applied Mathematics professor Emo Todorov, and CSE professor Sergey Levine enables the robot to refine its movements as it practices a task.

“‘Hand manipulation is one of the hardest problems that roboticists have to solve,’ said lead author Vikash Kumar…’A lot of robots today have pretty capable arms but the hand is as simple as a suction cup or maybe a claw or a gripper.’

“By contrast, the UW research team spent years custom building one of the most highly capable five-fingered robot hands in the world. Then they developed an accurate simulation model that enables a computer to analyze movements in real time. In their latest demonstration, they apply the model to the hardware and real-world tasks like rotating an elongated object.

“With each attempt, the robot hand gets progressively more adept at spinning the tube, thanks to machine learning algorithms that help it model both the basic physics involved and plan which actions it should take to achieve the desired result.”

The robot hand used to demonstrate the team’s autonomous learning system was developed in by Kumar, Todorov and UW CSE Ph.D. alum Zhe Xu (now a postdoc at Yale). Levine, a pioneer in the use of deep learning to create neural network controllers for robots, worked on the project while completing his postdoc at the University of California, Berkeley prior to joining the UW CSE faculty this year.

“‘Usually people look at a motion and try to determine what exactly needs to happen —the pinky needs to move that way, so we’ll put some rules in and try it and if something doesn’t work, oh the middle finger moved too much and the pen tilted, so we’ll try another rule,’ said senior author and lab director Emo Todorov…

“‘It’s almost like making an animated film — it looks real but there was an army of animators tweaking it. What we are using is a universal approach that enables the robot to learn from its own movements and requires no tweaking from us.'”

The team will present its findings at the IEEE International Conference on Robotics and Automation (ICRA 2016) later this month in Stockholm, Sweden. Read the research paper here, and the news release here. Watch a video demonstration here, and check out coverage by Wired, CNN Money, Gizmag, GeekWire, Fox News, Business Insider, and ZDNet.

A robot hand that learns by doing? That deserves a high-five!