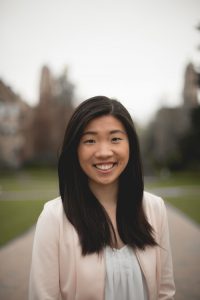 Kaitlyn Zhou, a sophomore majoring in computer science and human-centered design and engineering, has been elected to the board of directors of the Associated Student of the University of Washington (ASUW). The ASUW represents UW Seattle undergraduates and their interests through programming, services and advocacy and has a budget of roughly $1 million.

Zhou, who was elected the new director of university affairs, ran on a student-centered platform focused on accessibility, affordability and translating student priorities into administrative action. She is particularly interested in addressing rising student debt; expanding representation of commuter, transfer and non-traditional students in ASUW; and ensuring students’ voices are heard on critical issues such as campus safety and mental health.

This is the latest in a string of service and leadership roles for Zhou. She has served in the ASUW student senate for the past two years. She is also a member of the Provost Advisory Committee, which advocates for student priorities in budgeting, as well as the speaker selection manager for TEDxUofW.

Zhou is also active in research, co-authoring a paper examining rumor and uncertainty on social media that was featured at the recent CHI 2016 conference.

Read about the ASUW election results in the UW Daily article, and learn more about Zhou and her platform here.