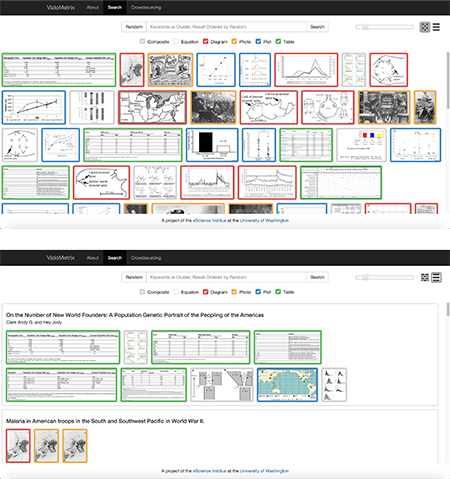 VizioMetrix—the world’s first visual search engine for scientific diagrams, developed by a team at the UW’s eScience Institute—was the subject of a great article that appeared in MIT Technology Review over the weekend. The article reports on researchers’ efforts to understand the presentation of visual information in scientific literature, or viziometrics, based on a paper co-authored by Electrical Engineering Ph.D. student Po-Shen Lee, iSchool professor and Data Science Fellow Jevin West, and Associate Director, Senior Data Science Fellow and CSE affiliate professor Bill Howe.

“Most scientists recognize the importance of good graphics for communicating complex ideas. It’s hard to describe the structure of DNA, for example, without a diagram.

“And yet, there is little if any evidence showing that good graphics are an important part of the scientific endeavor. The significance of good graphics may seem self-evident, but without evidence, it is merely a hypothesis.

“Today, that changes thanks to the work of Po-shen Lee [and] pals at the University of Washington in Seattle who have used a machine-vision algorithm to search for graphics in scientific papers and then analyze and classify them. This work reveals for the first time that graphics play an important role in the scientific process.”

The article goes on to explain how the team assembled a searchable database of 10 million scientific visuals by training a machine vision algorithm to separate multi-chart figures into their component parts and classify different types of figures. In analyzing the resulting data, the team found a significant correlation between the most successful scientific papers and the amount of information conveyed visually within the publication—information that has been largely ignored by current bibliometrics and scientometrics. This work will almost certainly influence how we present and access scientific information in the future.

Read the full article here, and try VizioMetrix here. Read the research paper here. UPDATE: Check out a terrific article on VizioMetrics that appeared in the print and online edition of The Economist here.