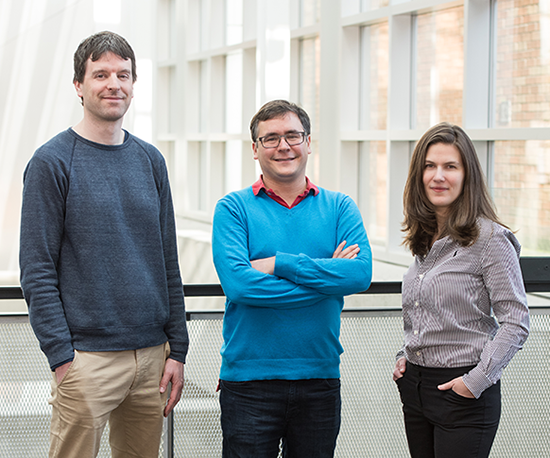 Scientific American published a terrific article this week highlighting the work of UW and Microsoft researchers in the Molecular Information Systems Lab (MISL) as part of a broader examination of efforts to re-purpose DNA as a digital data storage medium. The magazine spoke with UW CSE and Electrical Engineering professor Georg Seelig and Microsoft researcher and CSE affiliate professor Karin Strauss about the project, which is generating a lot of buzz for its potential to revolutionize digital storage—offering massive expansion in both density and durability—in the age of big data.

“Humans will generate more than 16 trillion gigabytes of digital data by 2017, and much of it will need to be archived: Think: legal, financial and medical records as well as multimedia files. Data is stored today on hard drives, optical disks or tapes in energy-hogging, warehouse-size data centers. These media last anywhere from a few years to three decades at most. Plus, says Microsoft Research computer architect Karin Strauss, ‘we’re producing a lot more data than the storage industry is producing devices for, and projections show that this gap is expected to widen….’

“In April Microsoft’s Strauss and computer scientists Georg Seelig and Luis Ceze at the University of Washington reported being able to write three image files, each a few tens of kilobytes, in 40,000 strands of DNA using their own encoding scheme—and then reading them individually with no errors. They presented this work in April at an Association for Computing Machinery conference. With the 10 million strands Microsoft is buying from Twist Bioscience, the team plans to prove that DNA data storage can work on a much larger scale. ‘Our goal is to demonstrate an end-to-end system where we encode files to DNA, have the molecules synthesized, store them for a long time and then recover them by taking DNA out and sequencing it,’ Strauss says. ‘Start with bits and go back to bits.’

Read the full article here, visit the MISL website here, and check out our past blog coverage here.

Published by Kristin Osborne on June 1, 2016