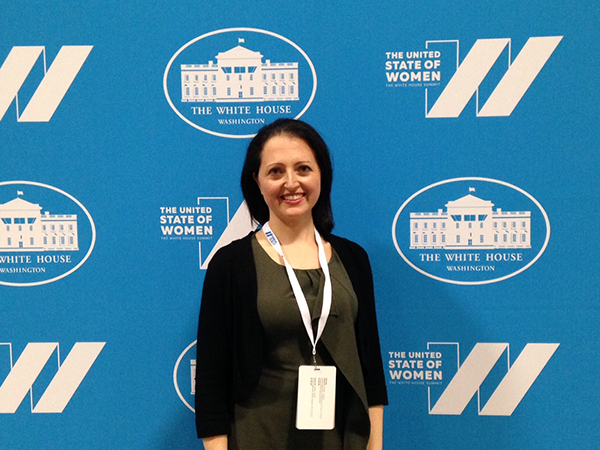 Anat Caspi, director of UW CSE’s Taskar Center for Accessible Technology, is attending the United States of Women Summit convened by the White House this week. She was invited to participate in recognition of her efforts to lead change on issues important to women and girls.

The summit is bringing together 5,000 people from all industries and walks of life to celebrate the progress that has been made to advance gender equality and identify the actions needed to move forward. It is organized around six pillars: economic empowerment, health and wellness, educational opportunity, preventing violence against women, entrepreneurship and innovation, and leadership and civic engagement. Caspi checks several of those boxes as an advocate for participatory design and using technology to improve quality of life for people of all abilities in her role at the Taskar Center. The center—which was established in memory of the late UW CSE professor Ben Taskar—taps into UW CSE’s strength in accessibility, sensing and novel interfaces to develop and deploy technologies that will increase independence for individuals with motor and speech impairments. 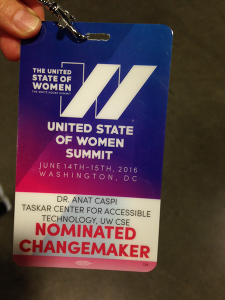 Caspi has been an invaluable resource to students interested in accessible design. She has advised students participating in the City of Seattle’s Hack the Commute competition and in the eScience Institute’s Data Science for the Social Good program. Caspi is also an instructor in our Accessibility Capstone course for undergraduates.

The United States of Women Summit runs today and tomorrow in Washington, D.C. and features First Lady Michelle Obama, Vice President Joe Biden, and a who’s who list of leaders from business, entertainment, academia, non-profits and government. Sessions are being streamed live online. Find out more about the summit and supporting activities by visiting the USOW website here.