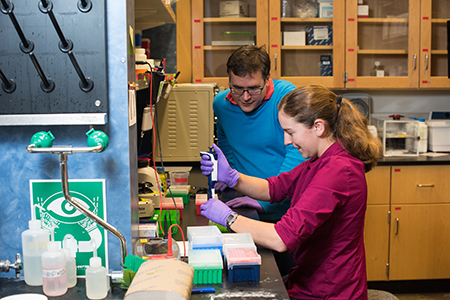 Researchers in the Molecular Information Systems Lab housed at the University of Washington have achieved a new milestone in their quest to develop the next generation of data storage by encoding a world record-setting 200 megabytes of data in strands of DNA. A team that includes UW CSE professor Luis Ceze and Microsoft researcher (and UW CSE affiliate professor) Karin Strauss announced today that it has successfully stored and retrieved an impressive list of multimedia and literary works, including a high-definition music video by the band OK Go, the complete Universal Declaration of Human Rights in over 100 languages, the novel War and Peace, and more—all contained in a space smaller than the tip of a pencil.

The Microsoft Next blog has the full story. Here’s an excerpt:

“Demand for data storage is growing exponentially, and the capacity of existing storage media is not keeping pace.  That’s making it hard for organizations that need to store a lot of data – such as hospitals with vast databases of patient data or companies with lots of video footage – to keep up. And it means information is being lost, and the problem will only worsen without a new solution.

“DNA could be the answer.

“It has several advantages as a storage medium. It’s compact, durable – capable of lasting for a very long time if kept in good conditions (DNA from woolly mammoths was recovered several thousand years after they went extinct, for instance) – and will always be current, the researchers believe.

“‘As long as there is DNA-based life on the planet, we’ll be interested in reading it,’ said Karin Strauss, the principal Microsoft researcher on the project. ‘So it’s eternally relevant.'”

In a Q&A on UW Today, Ceze explained how the team combined concepts from molecular biology and computer science to achieve its latest milestone. He described how he and his colleagues use polymerase chain reactions—a technique commonly employed by microbiologists to amplify specific segments of DNA for research—to selectively access only the data they want to read. He also noted that, despite its reliability, “DNA writing and reading have errors, just like hard drives and electronic memories have errors, so we needed to develop error-correcting codes to reliably retrieve data.”

Published by Kristin Osborne on July 7, 2016