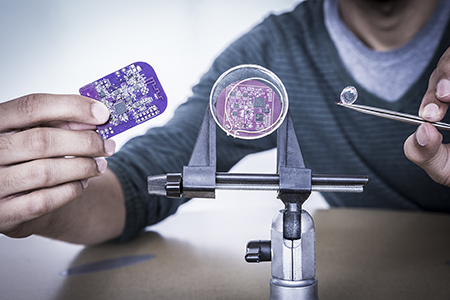 A team of UW CSE and Electrical Engineering researchers have developed a novel communication system called interscatter that enables smart contact lenses, medical implants and credit cards to “talk” to smartphones and smartwatches using Wi-Fi. This groundbreaking technology, which was developed by students and faculty in the UW’s Networks & Mobile Systems Lab led by CSE professor Shyam Gollakota and the Sensor Systems Lab led by CSE and EE professor Josh Smith, has the potential to transform health care and usher in a new era of truly ubiquitous connectivity for a variety of devices.

“The team of UW electrical engineers and computer scientists has demonstrated for the first time that these types of power-limited devices can ‘talk’ to others using standard Wi-Fi communication. Their system requires no specialized equipment, relying solely on mobile devices commonly found with users to generate Wi-Fi signals using 10,000 times less energy than conventional methods.

“‘Instead of generating Wi-Fi signals on your own, our technology creates Wi-Fi by using Bluetooth transmissions from nearby mobile devices such as smartwatches,’ said co-author Vamsi Talla, a recent UW doctoral graduate in Electrical Engineering who is now a research associate in Computer Science & Engineering.

The team, which also includes EE Ph.D. students Vikram Iyer and Bryce Kellogg, built prototypes of three technologies that are made possible by the development of interscatter: a smart contact lens that can monitor and send medical information to a smartphone, an implantable neural recording device, and credit cards that can communicate directly with one another.

“‘Providing the ability for these everyday objects like credit cards – in addition to implanted devices – to communicate with mobile devices can unleash the power of ubiquitous connectivity,’ Gollakota said.

The researchers will present interscatter at the Association for Computing Machinery’s SIGCOMM 2016 conference next week in Florianópolis, Brazil.

Published by Kristin Osborne on August 17, 2016