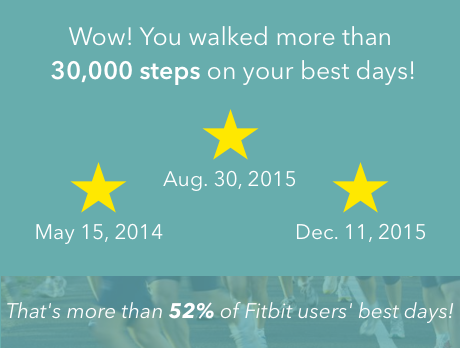 Researchers from UW CSE and UW Human Centered Design & Engineering have released the results of a new study that examines how people’s experience with Fitbit and other personal tracking tools could be improved with different design approaches. Their insights could help inspire people who have abandoned such tools to reconsider that “device in the drawer” and get back on track. From the UW News release:

“The research team surveyed 141 people who had lapsed in using Fitbit. They showed the subjects seven different visual representations and ways of framing previously collected data, to see if the data could offer additional support and encouragement to be healthy if portrayed in new and interesting ways.

“Half of these Fitbit users described feeling guilty about their lapsed Fitbit use, and nearly all of those said they would like to return to activity tracking. Twenty-one said they got no value out of tracking, found it annoying, or struggled to connect the data to behavior change. Five participants felt they had learned enough about their habits, and 45 reported mixed feelings about abandoning their Fitbit.”

According to lead author and CSE Ph.D. student Daniel Epstein, “People feel more guilt when it comes to abandoning health tracking, as compared to something like location tracking, which is more of a fun thing…we wanted to see if there are design opportunities to better support people who have had different experiences using Fitbit.”

The researchers found that users’ preferences for what data was presented – and how – changed based on how long they had been engaged in personal tracking and whether comparisons to their peers carried positive or negative connotations. The results indicate that designers should eschew a one-size-fits-all approach in favor of supporting a variety of users.

For example, CSE professor and study co-author James Fogarty suggests that it’s a mistake to assume everyone will track forever. “Given that some people feel relief when they give it up, there may be better ways to help them get better value out of the data after they’re done, or reconnect them to the app for weeklong check-ins or periodic tune-ups that don’t presume they’ll be doing this every day for the rest of their lives.”

The team, which also included HCDE professor (and CSE adjunct) Sean Munson, CSE and iSchool bachelor’s alum Jennifer Kang, and CSE and HCDE postdoc Laura Pina, will present its findings at the Ubicomp 2016 conference next week in Heidelberg, Germany.

Read the full UW News release here and the research paper here. Watch a slideshow about the project here.

Published by Kristin Osborne on September 8, 2016