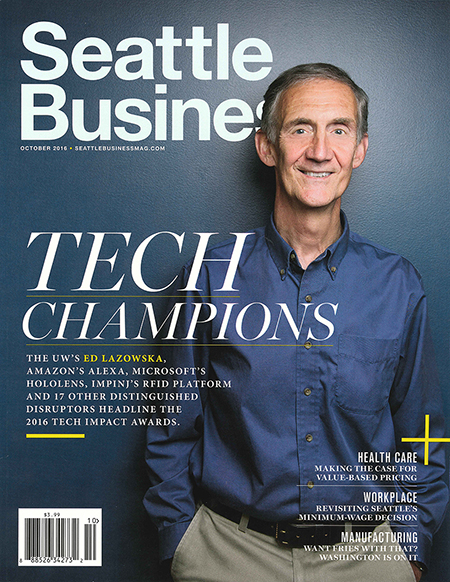 UW CSE was center stage last night at Seattle Business magazine’s annual Tech Impact Awards gala honoring the people and companies driving innovation and economic prosperity in the Puget Sound region. Professor Ed Lazowska was honored as the 2016 Tech Impact Champion for his achievements and advocacy on behalf of the tech community, while Impinj and Turi—UW CSE spin-outs that recently celebrated a successful IPO and acquisition, respectively—were highlighted for their groundbreaking innovations.

Lazowska, who graces the cover of the magazine’s October issue, is lauded for his vision, enthusiasm, and just plain persistence in positioning UW CSE among the upper echelon of computer science programs—including his role in recruiting leading faculty to the region. The magazine also credits him with leading the charge to position the University of Washington and Seattle at the forefront of cloud computing and the data science revolution, and notes that he has earned the admiration of students, colleagues and collaborators across the board for his commitment to elevating not only Washington’s flagship public university and its technology sector, but its people.

“Our job,” he tells the magazine, “is to provide socioeconomic mobility for bright kids in this region.”

Since Lazowska arrived in Seattle 39 years ago—when the local tech sector consisted largely of airplanes, medical devices, and test instruments, and Microsoft was 12 people in Albuquerque—the Emerald City has come into its own as a region with tremendous capacity for innovation in a range of industries. As Seattle Business put it, “With his trademark enthusiasm for the UW and the local tech sector, this celebrated educator, researcher, adviser and booster has played an important role in that transformation.” 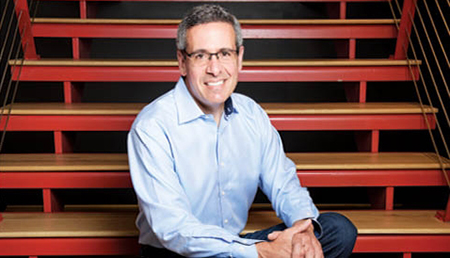 Impinj, started by then-UW CSE professor Chris Diorio, was honored in the Emerging Technology/Productivity category for its RAIN RFID technology. Since its founding in 2000, Impinj has grown to more than 200 employees and its product was used on more than five billion items last year. Diorio tells Seattle Business that Impinj is “giving digital life to everything in your everyday world, extending the reach of the internet by a factor of 100.” With a successful IPO, a market cap of around $350 million, and 95 percent of the apparel market yet to be tapped, Impinj’s future growth is something else worth tracking. 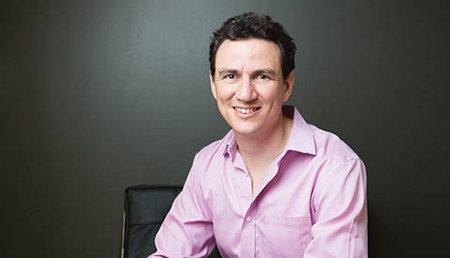 Machine learning startup Turi, led by UW CSE professor Carlos Guestrin, collected the award for the Intelligent Applications category. The company, which was recently acquired by Apple, developed the GraphLab platform to enable data scientists to create their own intelligent applications for recommendation engines, fraud detection and customer management. As competition judge Matt McIlwain of Madrona Venture Group commented, “Carlos Guestrin is a unique talent in both his deep understanding of machine learning and artificial intelligence.”

A unique talent, fittingly enough, who was recruited to the region thanks in part to the advocacy efforts of fellow honoree Lazowska.

Published by Kristin Osborne on September 22, 2016