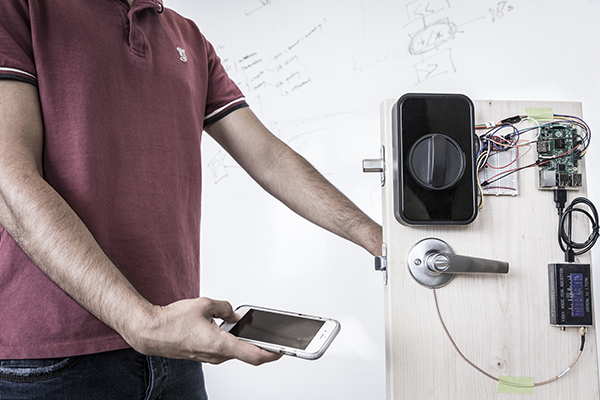 The Wall Street Journal reports today on the latest project to emerge from UW CSE’s Networks & Mobile Systems Lab: the ability to transmit passwords through the human body instead of over the air, where they are vulnerable to hacking. Such on-body transmissions would make it possible to open electronic smart locks or securely connect to wearable medical devices, such as glucose monitors, using the fingerprint sensors and touchpads commonly found on smartphones and laptops.

“Like an errant pass from an NFL quarterback, passwords sent through the air via Wi-Fi or Bluetooth can be intercepted, sometimes with disastrous consequences. Passwords are also a hassle to remember, which is why we tend to opt for simpler ones—but that, too, creates big security risks.

“Now researchers at the University of Washington have found a way to eliminate the airtime and the hassle—by using the human body as a conduit for passing security codes from one device to another….

“The technology involves no physical keys or cards that could be lost, stolen or copied—and unlike some biometric systems, it doesn’t require a digital fingerprint stored at the door (from which it might be stolen). Passwords for each door could be unique yet easily shared with a roommate or spouse. Since these passwords would rely on your device’s memory, not your own, they could be very complex and strong.”

As Gollakota explained in the UW News release, “Fingerprint sensors have so far been used as an input device. What is cool is that we’ve shown for the first time that fingerprint sensors can be re-purposed to send out information that is confined to the body.”

Published by Kristin Osborne on October 7, 2016