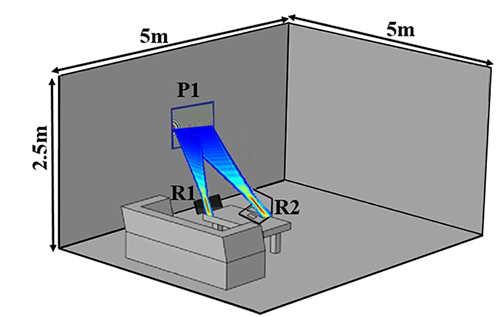 A team of engineers from the UW, Duke University, and Intellectual Ventures’ Invention Science Fund has moved a step closer to liberating us from those pesky power cords and bulky battery chargers. In a paper posted on arXiv, the researchers explain how flat-screen technology could be used to build a wireless power transfer system right into a wall or ceiling that is capable of efficiently charging a variety of devices in a room.

According to UW CSE and Electrical Engineering professor Matt Reynolds, “There is an enormous demand for alternatives to today’s clunky charging pads and cumbersome cables, which restrict the mobility of a smart phone or a tablet. Our proposed approach takes advantage of widely used LCD technology to seamlessly deliver wireless power to all kinds of smart devices.”

Reynolds and his colleagues propose a flat, reconfigurable antenna made of metamaterial that would gather and focus electromagnetic energy to recharge devices within its line of sight. Unlike existing, magnetic near-field systems, this new approach would not require close proximity to a charging station in order to achieve efficient power transfer.

“The ability to safely direct focused beams of microwave energy to charge specific devices, while avoiding unwanted exposure to people, pets and other objects, is a game-changer for wireless power,” Reynolds said. “And we’re looking into alternatives to liquid crystals that could allow energy transfer at much higher power levels over greater distances.”

Published by Kristin Osborne on October 24, 2016