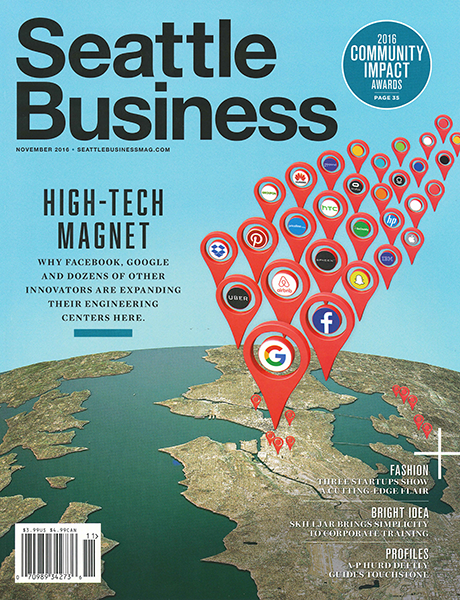 For its November cover article, Seattle Business magazine examines the factors that contribute to our region’s growing attractiveness to tech companies looking to expand or open new engineering operations outside of their hometowns. The list of firms who have put down roots in and around the Emerald City is a who’s who of fast-growing firms, multi-national powerhouses, and household names, including Airbnb, Alibaba, Facebook, Google, Magic Leap, Pinterest, Snapchat, and Uber. In some cases, the newcomers’ local workforce has grown to hundreds or even thousands of employees — with space for even more.

“Eighty satellite offices may not seem like many, given that there are some 12,000 tech firms in Washington state. But the number of branches has grown dramatically in recent years, and they tend to include the world’s most successful companies with astonishingly rapid growth trajectories. More than half of the engineering centers have been established since 2014, according to GeekWire…While they typically start small, many have grown quickly and now play strategic roles for such global giants as Google and Facebook.

“The Seattle tech community, once described as Snow White and the Seven Dwarfs because of the overwhelming presence of Microsoft, has gradually become more diversified with the emergence of Amazon and numerous midsize companies like Tableau Software and F5 Networks. The new engineering centers add yet another important source of growth and variety.”

How to explain this astonishing growth? The magazine surveyed economic development, research and industry leaders on what makes our region so enticing. Quality of life (particularly if you like the great outdoors), inexpensive office space, a lower cost of living than the Bay Area — all of these may factor into a company’s decision to open an outpost here.

But the key ingredient in Seattle’s secret sauce, which comes up again and again, is talent — lots of it, according to the article:

“‘We have more software engineers than any city per capita in the nation,’ says Suzanne Dale Estey, CEO of the Economic Development Council of Seattle & King County.

“And even though Silicon Valley is by far the leader in venture capital funding, WTIA CEO Michael Schutzler says, ‘For actual engineering talent, for software development, this is the center of the universe.’

“Yet it’s not just about quantity. University of Washington Computer Science & Engineering Professor Ed Lazowska points out that Seattle area engineers are in the vanguard in a broad range of sectors, from cloud computing and e-commerce to online gaming and virtual reality.

“‘We are, honestly, in a different league,’ says Lazowska. ‘It’s Silicon Valley and Seattle. New York has an extremely vibrant startup culture, but it is much less of a magnet for engineering offices.'”

The article notes that UW CSE has played its part in drawing companies from outside of the region. For example, the magazine recalls the story of then-UW CSE professor Brian Bershad opening Google’s first Seattle office. It also cites the influence of CSE and Electrical Engineering professor Shwetak Patel, whose work on low-power sensing for water and energy monitoring led Belkin International to establish WeMo Labs.

Published by Kristin Osborne on November 3, 2016