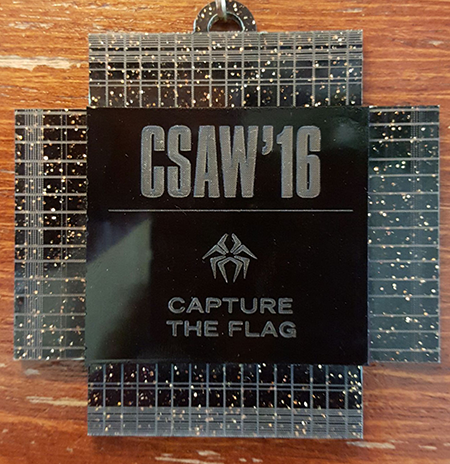 Last week, a team of UW undergraduates known as Batman’s Kitchen became cybersecurity superheroes when they earned third place at the U.S. finals of Capture the Flag at Cyber Security Awareness Week (CSAW ’16). The CSAW CTF competition, which was hosted by New York University’s Tanton School of Engineering, featured 15 teams battling it out in response to a series of computer security challenges inspired by real-world scenarios that tested their cybercrime-fighting mettle. The New York competition was one of three held simultaneously around the world in what is billed as the largest student-run cybersecurity contest.

The competition, which spanned 36 hours, began Thursday night and ran uninterrupted until late afternoon on Saturday. The grueling schedule meant team members had to take turns sleeping in shifts.

Was it worth it? UW CSE student Alex Kirchhoff, who traveled to Brooklyn to compete as a member of Batman’s Kitchen, says yes.

“CSAW gives us the opportunity to practice computer security skills, meet students from other universities with similar interests, and connect with companies in the field,” he said.

“Competing with the best undergraduate teams around the U.S. and Canada is really fun and rewarding,” said Hsieh. Arens was similarly enthusiastic, complimenting the “great teams, challenges, and sponsors” involved in the competition.

After an action-packed weekend of battling cyber-villains, the students are back in classes this week. Three members of the team that went to New York barely have time to reflect on their success before gearing up for their next competition in just a few short days — this time, traveling to Japan.

“I was surprised by how well we did,” said Wang. “Now, I’m hoping for the best for Trend Micro finals this week.”

Wang, Kirchhoff and Hsieh will be joined by pre-engineering student Grayson Sinclair at the Trend Micro CTF competition in Tokyo. The talented members of Batman’s Kitchen are making a habit out of not only representing the UW, but the entire country in these elite cybersecurity competitions.

“This year, Batman’s Kitchen is going global,” said Melody Kadenko, CSE research program director and adviser to Batman’s Kitchen. “We were the only team from a U.S. university to compete at the VolgaCTF finals in Russia earlier this fall, and we will be the only U.S.-based team competing in Japan.”

Batman’s Kitchen is growing in size as well as international visibility. Around 700 current and former students, drawn from the three UW campuses, are involved in meetings and activities. Kadenko selects members to represent Batman’s Kitchen in various competitions from a pool of core CTF enthusiasts who have developed skills in cryptography, forensics, web security and reverse engineering. Going into CSAW, the team ranked 34th out of nearly 11,000 CTF teams worldwide.

Read more about the results of the CSAW CTF here.

Way to go, team — and good luck in Japan!