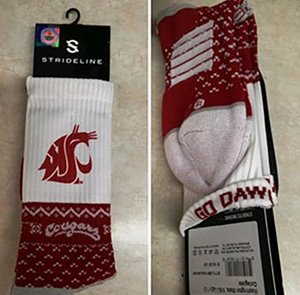 “Washington State University Cougar fans are going to want to spend a bit of time staring at their feet this morning.

“Bartell Drugs issued a recall this week for an $18 Christmas pair of Strideline WSU College ‘Cougar Socks.’ The red-and-white socks have a not-so-Cougarish slogan printed on the inside cuff. It reads, ‘Go Dawgs’ …

“‘It’s pretty unfortunate,’ he said, though he admitted he can see why some might find it funny.”

Almost as funny as back in August 2014 when WSU’s “Academic Planner” featured a photo of UW on the cover! As we said back then, “We can’t make up stuff that’s this great!”