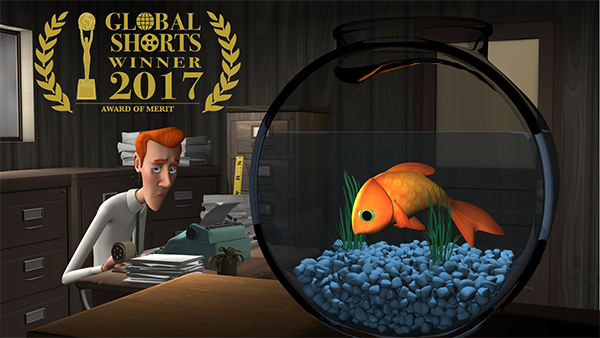 “Fish Out of Water,” an animated film created by students in the Allen School’s interdisciplinary Animation Capstone, has won an Award of Merit in the 2017 Global Shorts competition. Global Shorts is an international competition based in Los Angeles that recognizes outstanding films with run-times of 50 minutes or less. It attracts works from filmmakers around the world, some of whom go on to earn nominations and awards in such prestigious competitions as the Golden Globes, Cannes Film Festival, BAFTAs, and British Independent Film Awards.

“Fish Out of Water” tells the story of Roy, an office worker who struggles with a demanding job and an even more demanding boss. His situation is not helped by his office-mate, whose relentlessly cheery attitude even as the paperwork piles up just compounds Roy’s misery. He gets through his days by fantasizing about the past — but when he comes to the realization that life is too short for such soul-destroying drudgery, he decides to chart a new course.

Each year, the Allen School’s Animation Capstone offers students an opportunity to put into practice what they learned in their digital animation classes by producing a short animated film. Participants work on all aspects of production, including scene planning, modeling, digital cinematography, character animation, and rendering.

View the trailer for “Fish Out of Water” here, and learn more about the Animation Capstone here.

Congratulations to Barbara, her students, and the entire production team!