Allen School faculty and alumni honored at the 2017 GeekWire Awards 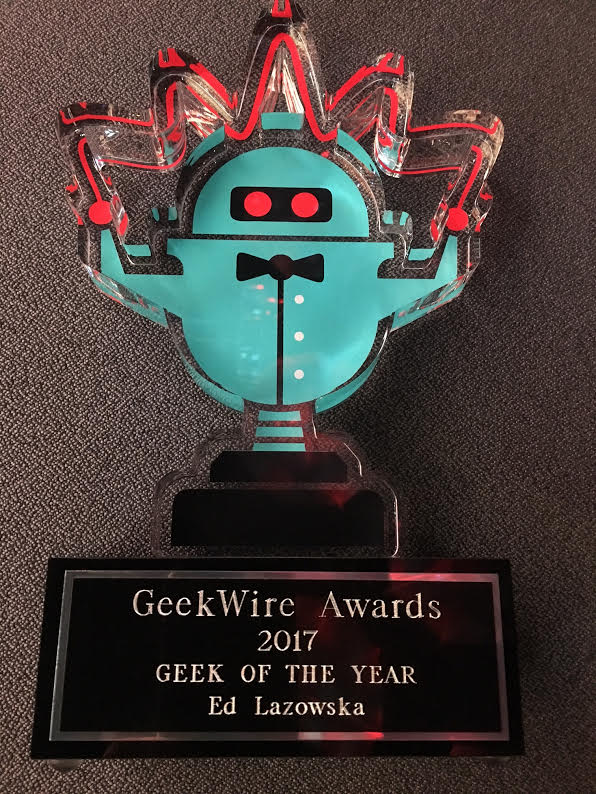 Last night was the annual GeekWire Awards bash, where everyone who’s anyone in local tech assembles to celebrate the best of the Northwest in entrepreneurship and innovation. A number of people and companies with connections to the Allen School were nominated for awards, which are decided by popular vote. At the end of the evening, Allen School professor Ed Lazowska emerged from an impressive field of nominees to take home the Geek of the Year trophy, while alum Andrew Putnam (Ph.D., ’09) and affiliate professor Doug Burger of Microsoft Research helped lead the team behind Project Catapult to victory in the Innovation of the Year category.

Lazowska earned his Geek of the Year title for being the driving force behind the campaigns to create the Allen School and to construct a second computer science and engineering building that will enable the program to expand in response to growing student and employer demand. Microsoft’s Project Catapult combines a field programmable gate array (FPGA) integrated into almost every new Microsoft datacenter server with a unique distributed architecture that creates an “acceleration fabric” throughout the datacenter; this elastic reconfigurable acceleration fabric provides the flexibility to harness an individual FPGA or up to thousands of them for a single service. (UW is well represented on the core Catapult team in addition to Andrew Putnam and Doug Burger: Adrian Caulfield is an Allen School bachelors alum and received his Ph.D. from UCSD working with Allen School Ph.D. alum Steve Swanson; Michael Haselman received his Ph.D. from UW EE working with Allen School Ph.D. alum and Adjunct Professor Scott Hauck; and Jack Lavier received his Masters from UW EE.)

Nominees – five in each award category – were selected by an expert panel; it’s a tremendous honor just to be nominated for a GeekWire Award. Other nominees with Allen School connections:

The field for App of the Year included Senosis Health, a UW spin-out co-founded by Allen School and EE professor Shwetak Patel to commercialize the mobile health apps that he and his students develop in the UbiComp Lab. The apps, which effectively turn an off-the-shelf smartphone into a hand-held medical device using the phone’s built-in sensors, include BiliCam, which detects newborn jaundice; SpiroSmart/SpiroCall, for monitoring lung function; and HemaApp, a non-invasive way to measure blood hemoglobin.

Two Allen School startups were among the nominees for Deal of the Year: RFID pioneer Impinj, which was co-founded by professor Chris Diorio, was lauded for its successful IPO last summer, and Turi, the machine learning startup founded by professor Carlos Guestrin that was acquired by Apple. Impinj and Turi are among the more than 15 Allen School startups funded by our friends at Madrona Venture Group.

Allen School alum Tim Prouty (B.S., ’06) was nominated in the Hire of the Year category after joining shipping technology company Convoy as head of engineering. It was a major coup for the startup, which has been referred to as the “Uber of trucking” — not least because Prouty grew the actual Uber’s Seattle engineering office from zero to 150 employees in the span of 18 months before changing direction to focus on freight.

Finally, a tip of the hat to Ben Gilbert, recognized as Young Entrepreneur of the Year for his work at Pioneer Square Labs, which he co-founded with Greg Gottesman, who teaches the Allen School’s entrepreneurship course annually.

See the complete list of winners here, and check out photos and videos of the event here. Read a terrific GeekWire Q&A with Lazowska here.

Congratulations to Ed, Andrew, Doug, and all of last night’s winners and nominees! And thanks to GeekWire for its amazing role as a catalyst for Seattle’s tech community!