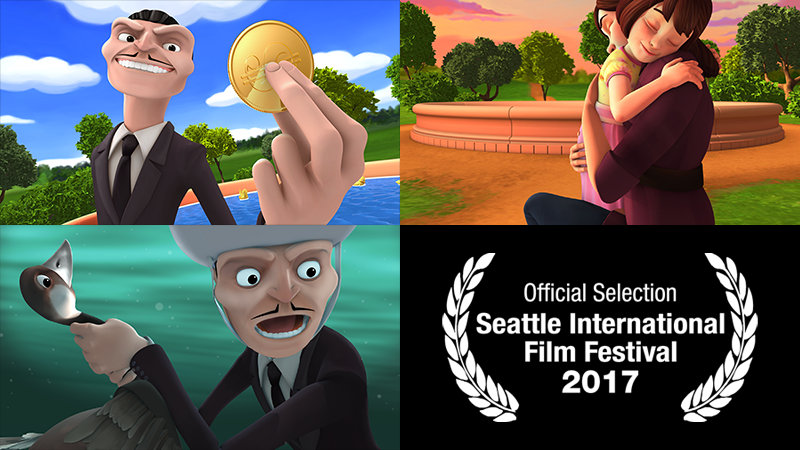 “Short Changed,” a film created by a team of students as part of the Allen School’s Animation Capstone, has been designated an Official Selection of the 43rd Seattle International Film Festival (SIFF). The festival, which runs from May 18 to June 11, is the largest of its kind in the United States and will feature more than 400 works from filmmakers in over 70 countries. “Short Changed” was produced in the UW’s Animation Research Labs and directed by Allen School faculty member Barbara Mones.

“Short Changed” will be screened during The Family Picture Show, a collection of animated and live action shorts curated by festival organizers for “the young and the young at heart” as part of SIFF’s ShortsFest Weekend. The film tells the story of a greedy thief who comes up with a devious plan to profit from people’s hopes and dreams. The thief dons a disguise that enables him to gather the coins that people cast into a fountain as they make their wishes. However, one of the fountain’s regular inhabitants decides that there is something fishy about the newcomer — and our thief quickly discovers that when it comes to stealing a little girl’s wish, crime doesn’t pay.

“Short Changed” will be screened on Saturday, May 27 at the SIFF Cinema Uptown. This is the third Allen School capstone film to appear at SIFF, following the selection of “Catch and Release” in 2012 and “Kings” in 2010.

Check out the “Short Changed” SIFF page here and view the trailer here. Learn more about the Animation Capstone here.

Congratulations to Barbara, Erin, and the entire crew!