Pooja Sethi: The “badass and brilliant” Allen School alumna who is not afraid to fail 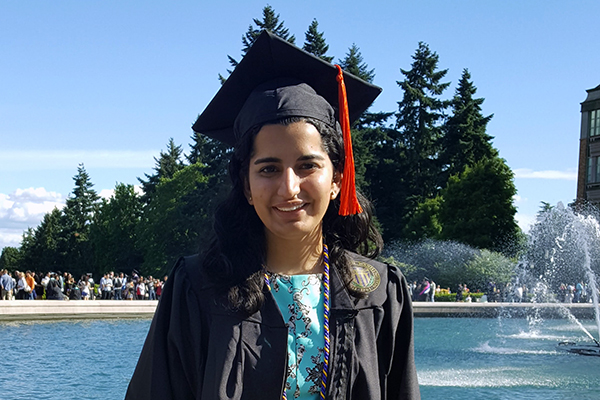 The latest installment of our Undergrad Spotlight features Pooja Sethi, a native of Granite Falls, Washington who graduated from the Allen School with honors last month. Sethi received her bachelor’s degree in computer engineering and was recognized as one of two winners of our Best Senior Thesis Award, which she earned for “Respeak: A Voice-based, Crowd-powered, and Accessible Speech Transcription System” that she worked on with professor Richard Anderson and Ph.D. student Aditya Vashistha in the Allen School’s Information & Communication Technology for Development Lab.

In addition to building a reputation as an outstanding undergraduate researcher, during the course of her studies Sethi participated in five internships, collaborated on research with the Allen Institute of Artificial Intelligence, served as an undergraduate teaching assistant, and served as an officer for the local chapters of ACM and ACM-W.

Sethi plans to spend the summer working with professor Yejin Choi of the Allen School’s Natural Language Processing research group. After that, she will head to Menlo Park for full-time employment with Facebook. The Allen School took an opportunity, before Sethi leaves campus for California, to find out more about what attracted her to computer science, what she looks forward to next, and what advice she would give to students following in her footsteps.

Allen School: Why did you choose to study CSE?

Pooja Sethi: It’s kind of funny, but growing up, I thought the last thing I would ever want to be was a software engineer. The title always conjured up images of people sitting in lonely cubicles staring at blinking lights and yawning. I’ve also always wanted to do something that would help other people, so since I was a kid I thought I would be a doctor.

In high school, I discovered I really loved math and physics and being able to understand the logic behind how the world works. That motivated me to take my first programming class, and I realized how fun it was to be able to “speak” to computers in code. CSE was also really appealing because it has applications to so many facets of life: people here work on everything from finding security vulnerabilities in self-driving cars to using smartphones to detect if a newborn has jaundice. Computers power everything in our lives, and as I was learning to program, it felt empowering to not only understand how computers work but also to be able to create new things with them.

Allen School: What was your favorite CSE course?

PS: That’s so hard — there were so many CSE classes that I loved! I’m going to list a few since I have a hard time updating weights in a priority queue. CSE 332 (Data Structures) was my gateway into fundamental topics and made me feel like a “real” CSE student. My favorite systems courses were CSE 444 (Database Internals) and CSE 452 (Distributed Systems), because let’s be real, it sounds pretty cool to say you’ve implemented a Query Optimizer or a Paxos-based Key Value Service. I also loved CSE 517 (Natural Language Processing) and CSE 573 (Artificial Intelligence), since they introduced me to my current research area of language generation using deep learning. Last but not least, I would highly recommend CSE 599 (Entrepreneurship) with professor Ed Lazowska and Madrona Venture Group’s Greg Gottesman. It was really fun to build a product from the ground-up and hear from amazing entrepreneurs in the Seattle area.

Allen School: What did you like most or what will you miss most about being a CSE undergraduate?

PS: The people in CSE are hands down what I will miss the most. I’ve found that there is something about being trapped in a basement with tea, underflowing snacks, Linux machines, and buggy code that is very conducive to building lifelong friendships. I’m also really thankful to all of the advisers, grad students, and professors I worked with who made CSE feel awe-inspiring but also very welcoming. And of course, the gorgeous view of Lake Washington from the Allen Center balcony will be sorely missed!

Allen School: Are there any people in particular you’d like to mention, who helped shape your experience as a student?

PS: A huge thank you to all of these wonderful people: First, the “Never Stop Dreaming” family of my fellow students: Karishma Mandyam, Aishwarya Mandyam, Naomi Musgrave, Hasanthi Neti, Huong Vo, Grant Timmerman, Dan Radion, Karan Goel, Anna Pendleton, Lilian Liang, Michael Petrochuk, and Bran Hagger. They filled my college experience with so much joy, code, and chocolate milk. To my big sisters in the Bay Area: Vinaya Polamreddi and Arathi Mani, for their constant inspiration, goddess-level AI prowess, and (literal) sunshine in my life.

I also want to thank the amazing grad students and faculty who guided me through research: Aditya Vashistha, Richard Anderson, Gaetano Borriello, Yejin Choi, Ari Holtzman, Max Forbes, Talia Ringer, James Wilcox, and Zach Tatlock. Also, the lovely academic advisers — Raven Alexander, Jenifer Hiigli, and Maggie Ryan — for their kindness and for answering my many questions throughout the years.

And finally, to my mom, dad, and brother Aakash. I would not be anywhere I am today without my family.

Allen School: What is next for you after graduation?

PS: I’m really excited to be joining Facebook full-time as a software engineer in the fall in the Bay Area. During the summer, I’ll be at the Allen School working on conversational question generation in NLP, advised by Yejin. I’ll also be working part-time at a local startup called Cue doing NLP and machine learning consulting. I hope to go back to school for a Ph.D. in the semi-near future. I also plan on sleeping, climbing, and running more post-graduation; we shall see if I succeed.

Allen School: What advice do you have for younger CSE students coming after you?

PS: There is a stigma associated with talking about failures, especially in CSE where many students come in having gotten used to being top of their class and always getting things right. The truth is, there are many times where I did not get things right — I’ve been rejected from internships, received mediocre scores on exams, and questioned my ability to do this subject at three o’clock in the morning.

I’ve learned that what ends up mattering is not the failures themselves, but how you react to them and the perseverance you build by standing back up. So, to those students I say stand strong, remember that you are badass and brilliant (as a few of my friends like to say), and last but not least, stay humble and kind. There is always more to learn.

Allen School: Any final thoughts you’d like to share, as you get ready to start your next chapter?

PS: Thank you for an incredible four years. To new students coming in: you’re in for quite the adventure!

Good luck, Pooja, and thank you for being an exemplary member of the Allen School community — we look forward to seeing you at a future alumni event!