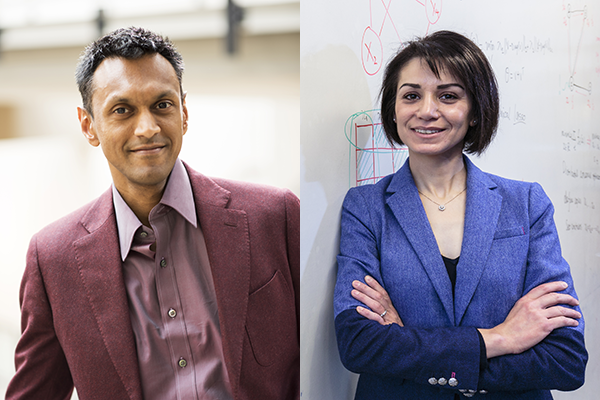 A team of University of Washington researchers co-led by Sham Kakade, a professor in the Allen School and Department of Statistics, and Electrical Engineering Professor Maryam Fazel have secured a $1.5 million award from the National Science Foundation (NSF) to develop new algorithmic tools that will advance the state of the art in data science. The funding will support the researchers’ project titled “Algorithms for Data Science: Complexity, Scalability, and Robustness” as part of the agency’s Transdisciplinary Research in Principles of Data Science (TRIPODS) program.

TRIPODS was designed to engage members of the theoretical computer science, mathematics and statistics communities in developing the theoretical foundations of data science to promote data-driven discovery. The UW proposal aims to produce a common language and set of design principles to guide the development of new algorithmic tools that will automate the process of extracting robust insights from vast troves of data.

“Modern data science challenges transcend the ideas of any single discipline, which is what makes this work so exciting,” Kakade said. “With the growing availability of large datasets and increasing computational resources, we need more robust algorithmic tools to address contemporary data science challenges — and we believe a unifying approach is needed to overcome those challenges, accelerate the pace of scientific discovery and generate solutions to real-world problems.”

In addition to developing the language for data-driven discovery, the researchers intend to train students and postdoctoral scholars to be well-versed in the disciplines that underpin data science and incorporate theoretical ideas into a data science curriculum.

“Our project is unique in that it places mathematical optimization theory at the heart of this endeavor, bridging across computer science, mathematics, and statistics,” said Fazel, who holds adjunct appointments in the Allen School, Statistics, and the Department of Mathematics. “The project covers both high-impact interdisciplinary research and institutional activities such as workshops and boot camps to train students with novel techniques from all three disciplines. Ultimately, the project could serve as a springboard for building a full-fledged NSF institute in Phase II of the program.”

The project is one of 12 proposals that received TRIPODS grants. The awards represent the NSF’s first major investment in “Harnessing the Data Revolution,” one of 10 “big ideas” the agency has identified as critical for future investment.

“These new TRIPODS projects will help build the theoretical foundations of data science that will enable continued data-driven discovery and breakthroughs across all fields of science and engineering,” said Jim Kurose, assistant director for Computer and Information Science and Engineering (CISE) at NSF, in a press release.

Published by Kristin Osborne on August 24, 2017