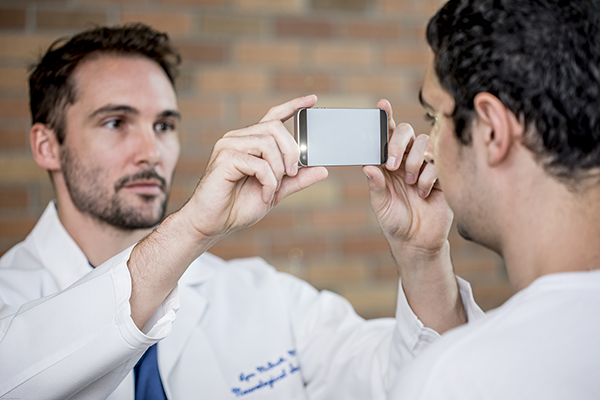 According to the U.S. Centers for Disease Control, an estimated 3.8 million sports-related concussions occur in this country alone — and roughly half of those go undiagnosed. Researchers in the Allen School’s UbiComp Lab and UW Medicine hope to reduce that risk and make sports safer by developing PupilScreen, a tool for measuring whether someone has suffered concussion by means of a smartphone app.

Currently, coaches and parents rely on subjective assessments like asking athletes questions or having them demonstrate their balance to determine whether they may be suffering from concussion. In cases of severe traumatic brain injury, physicians may use a penlight test — or, more rarely, an expensive pupillometer device — to measure a patient’s pupillary light reflex (PLR). Even with these tests, physicians rely on a process of elimination to rule out the most severe indicators of head trauma and arrive at a diagnosis of concussion. Inspired by research indicating that subtle changes in the PLR can point to concussion, the UW team aimed to create an inexpensive and easy-to-use tool for anyone, anywhere to gather the object data needed to make the right call when it comes to an athlete’s health.

“Right now the best screening protocols we have are still subjective,” professor Shwetak Patel, who holds a joint appointment in the Allen School and UW Department of Electrical Engineering, told UW News. “A player who really wants to get back on the field can find ways to game the system.”

PupilScreen would eliminate this element of uncertainty by providing an objective way to assess an individual for brain injury. It uses the smartphone camera flash to stimulate the pupillary response, then records a brief video of the pupil changing diameter. The video is processed using convolutional neural networks to measure changes in the pupil’s diameter and identify clinically relevant deviations from the normal pupillary response. In a small pilot study involving a combination of people with and without traumatic brain injury, clinicians successfully diagnosed cases of injury with near-perfect accuracy using PupilScreen. Although they relied on a 3-D printed box to control the amount of light to which subjects’ eyes were exposed during the study, the researchers are working on an app that can be used without accessories.

“The vision we’re shooting for is having someone simply hold the phone up and use the flash,” said Allen School Ph.D. student and lead author Alex Mariakakis. “We want every parent, coach, caregiver or EMT to who is concerned about a brain injury to use it on the spot without needing extra hardware.”

The CDC has found that individuals who suffer concussion are six times more likely to suffer a future head injury. With a tool like PupilScreen at their disposal, coaches and clinicians would be able to obtain an objective reading of an athlete’s condition before risking his/her return to the field of play. According to Dr. Lynn McGrath, co-author and resident physician in the Department of Neurological Surgery at UW Medicine, PupilScreen would fill an important gap in concussion screening and treatment.

“After further testing, we think this device will empower everyone from Little League coaches to NFL doctors to emergency department physicians to rapidly detect and triage head injury,” he said.

The next step will be to enlist the help of coaches and medical providers in field testing PupilScreen and gathering data to refine the tool by identifying which pupillary responses are most helpful for measuring ambiguous cases of concussion. The team plans to begin further testing next month, and aims to make a PupilScreen app commercially available within the next two years.

“Having an objective measure that a coach or parent or anyone on the sidelines of a game could use to screen for concussion would truly be a game-changer,” Patel said.

Published by Kristin Osborne on September 6, 2017