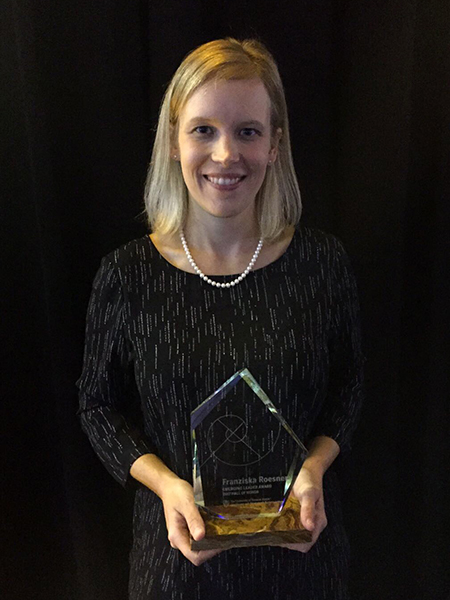 Allen School professor and Ph.D. alumna Franziska Roesner, co-director of the Privacy and Security Research Lab, received the 2017 Emerging Leader Award from the College of Natural Sciences at The University of Texas at Austin. Roesner, who earned her bachelor’s degree in 2008 from UT Austin before her arrival at the Allen School as a graduate student, was inducted into the college’s Hall of Honor at a ceremony last night.

Calling Roesner a “formidable force and leader in the world of computer security and privacy,” the college cited her work to identify the privacy risks to children of internet-connected toys, evaluate and address journalists’ security needs, and safeguard the privacy of web users as evidence of her growing leadership in the field. It also highlighted Roesner’s growing reputation as a leading voice on privacy and security related to emerging technologies such as augmented reality and the Internet of Things.

The Emerging Leader Award was created to recognize graduates of the college “who, in deed or action, reflect and recognize the importance of his or her education at The University.” Nominees are evaluated based on their contributions to their profession, recognition by their peers, and demonstrated ability, integrity, and stature. The winners are individuals in whom the faculty, staff, students, and fellow alumni will “take pride in and be inspired by their recognition.”

We certainly are inspired by the many contributions she has made to the field of computer science and to the Allen School community — and as our friends in Austin note, “Roesner has only just begun to make her mark.” This is turning into a banner year for Roesner, who previously earned a TR35 Award and a NSF CAREER Award.

Published by Kristin Osborne on September 22, 2017