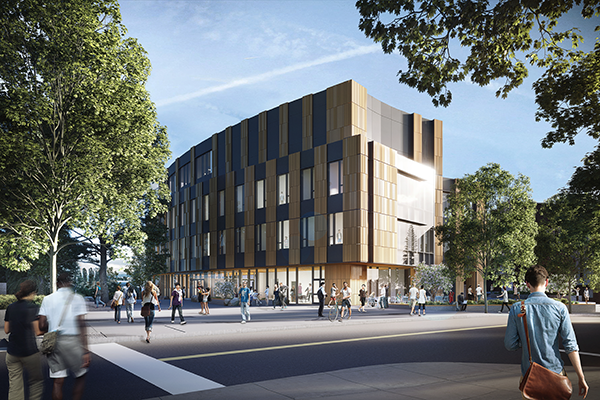 The University of Washington Board of Regents today approved the naming of the Allen School’s second building as the Bill & Melinda Gates Center for Computer Science & Engineering. The naming of the building in honor of the Gateses was made possible by gifts from Microsoft and a group of local business and philanthropic leaders who are longtime friends and colleagues of the couple.

“There is wonderful symbolism in having the Bill & Melinda Gates Center for Computer Science & Engineering across the street from the Paul G. Allen Center for Computer Science & Engineering on the University of Washington campus,” said Microsoft President Brad Smith in a news release. “As teenagers, Bill and Paul roamed UW computer labs. They went on to change the face of Seattle and the world — first with Microsoft, and later with their philanthropy. I can’t think of a better way for those of us who have had the privilege of working alongside Bill and Melinda to express our gratitude and admiration than to name this building for them.”

Smith and his spouse, Kathy Surace-Smith, are among the group of longtime friends and colleagues of the couple who personally contributed to the naming gift. Smith and fellow donors Charles & Lisa Simonyi spearheaded the fundraising effort to name the building in the Gateses’ honor. Altogether, the Friends of Bill & Melinda contributed more than $30 million toward the project.

The Bill & Melinda Gates Center is scheduled for completion in December 2018, and will be ready for occupancy in early 2019.

We are tremendously grateful to the Friends of Bill & Melinda for enabling this enduring tribute to the Gateses — and exceedingly proud to have a second home bearing their name. Thank you for giving us the room to grow and deliver a world-class computer science education to more of Washington’s students!

The Friends of Bill & Melinda

Read coverage of the announcement in the Seattle Times, GeekWire, The Wall Street Journal, Bloomberg, and Xconomy.