Pascale Wallace Patterson: The inspirational student leader who aspires to change the world 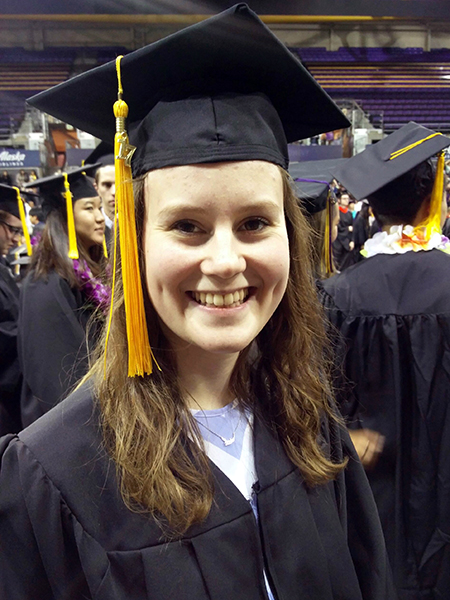 After a brief hiatus, our popular feature highlighting the adventures and achievements of the Allen School’s amazing undergraduate students is back. This edition of the Undergrad Spotlight profiles recent bachelor’s alumna and Oregon native Pascale Wallace Patterson, who is currently a student in the Allen School’s fifth-year master’s program.

At the Allen School’s Women in Computing Reception in October, Patterson received the inaugural Lisa Simonyi Prize. The award was established with support from Charles and Lisa Simonyi to recognize a graduating student who exemplifies the school’s commitment to excellence, leadership, and inclusiveness and who has the potential to change the world through computing. Patterson previously earned the Outstanding Senior Award and the Bob Bandes Memorial Award honoring exceptional teaching assistants in computer science, which were announced during the Allen School’s graduation celebration in June.

In addition to being a vital contributor to the Allen School community through her academic leadership and service, Patterson has also completed software engineering internships at multiple companies, including Google, Facebook, Microsoft, Intel, and Zymergen. She took a break from her studies this quarter to do a second stint at Google, where she is currently working with the cloud storage team in the company’s Seattle office. Patterson took time out of her busy schedule to share some thoughts on her experiences at the Allen School and her plans for the future.

Allen School: What inspired you to enroll in the 5th year master’s program?

Pascale Wallace Patterson: I applied to the program at the end of my junior year, when the thought of my imminent graduation was looming. I realized that I needed more time in school to figure out what I wanted to do and where I wanted to end up. At the time, I was still bouncing around ideas about whether I wanted to pursue a lecturing position, a Ph.D., or head straight to industry. The fifth-year master’s program offers the perfect opportunity for me to learn more about my interests and aspirations before committing to a more permanent path.

Allen School: What is your favorite aspect of being an Allen School student?

PWP: The inclusiveness and sense of community. I was warned when I came to the University of Washington that the university in its entirety is gigantic, so I was slightly worried that I would feel like I was drowning among the masses. And I have to admit, my freshman year (before I became a CS major), I did feel that way a little bit. But the school feels like a small community within the huge university. I was able to get to know my professors, which was important to me, and I found a great group of friends among the teaching assistants.

Allen School: You are the first student to receive the Lisa Simonyi Prize. What impact did that have on how you view yourself and your decision to pursue computer science? 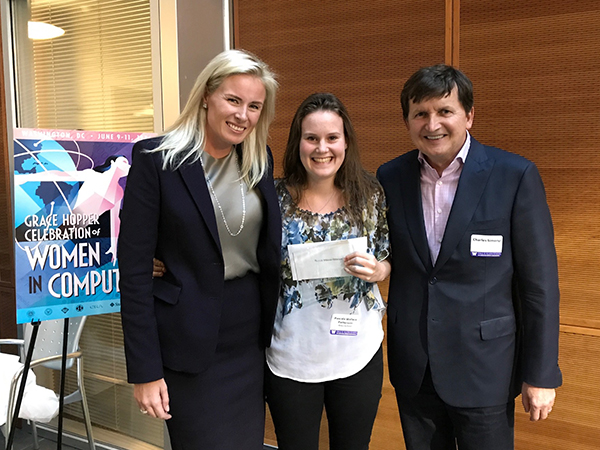 PWP: I want to express how honored I am to have received this prize. I didn’t see it coming because the school and the Simonyis wanted to keep it a surprise. A week or so before the Women in Computing Reception, I was advised that I should attend, but I was given few other details. I was – and still am – blown away. When the Simonyis stepped up to the podium to describe the award, Lisa told the audience that she and her husband had chosen a winner who they believed would cause a ripple effect and inspire others to achieve greatness. Specifically, she mentioned that she hoped her own two daughters would be inspired.

The emotions that I felt when Lisa announced my name are hard to describe. I have spent my life being inspired by my own role models, and being motivated by their brilliance. I think that as children, we grow up believing that we will change the world and hoping that we will be like the role models that win our respect. But sometime during the teenage and college years, we lose sight of the confidence that felt natural as a child. We realize that life is complicated. And at least for me, the idea of being a person who might inspire others had fallen from my radar.

I was trying to find my own way, and that meant burying myself in my work, and oftentimes feeling overwhelmed and a bit clueless. Sometimes I felt like everyone else had their lives figured out, and meanwhile I was just taking it one day at a time. When Lisa called out my name, the first feeling was one of disbelief, followed immediately by a rush of childlike self-assurance that I hadn’t experienced in years. The self-doubt was replaced with determination to live up to the challenge and be an inspiration.

Allen School: What do you like to do when you’re not in front of a computer?

PWP: I spend a lot of my time using food as a social activity, and I am a big fan of small dinner parties. Because of all that eating, I try to have at least one hobby that includes exercising. Recently, I’ve gotten into road biking, and a friend and I have promised each other that we are going to participate in the Seattle to Portland race next July!

Allen School: Have you decided on your path after graduation?

PWP: I think I would like to work full-time at a software company for a few years, but I am still deciding where. When I first started at UW, I thought I wanted to be doctor. Although I have decided since then that medical school is not right for me, I am still passionate about medicine and healthcare. I am hoping that sometime in the not-so-far future, I will be able to focus on software for medicine.

Allen School: Who or what in the Allen School has inspired you the most?

PWP: I think I’ve been most inspired by my peers. The school is really an amazing group of individuals. I’m surrounded by brilliant young minds — I have friends who are creating their own start-ups, working at top-tier companies, lecturing CSE courses, collaborating on research with world-renowned professors…you name it. I am confident that my friends will change the world with their talents, and that makes me feel like I can, too.

We are confident that she can, indeed, change the world — thank you, Pascale, for your commitment to excellence and for serving as a role model to the students who will follow in your footsteps!

Published by Kristin Osborne on December 11, 2017