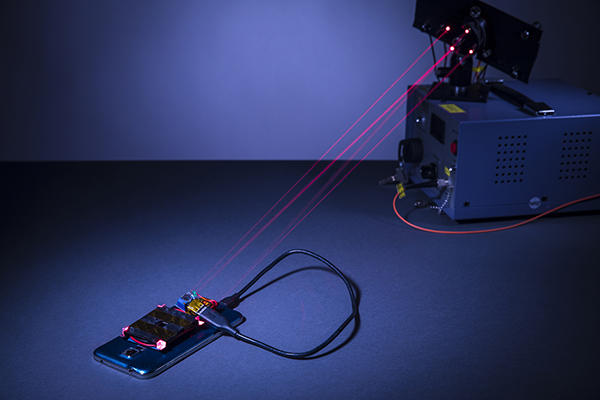 UW researchers’ laser-powered charging system can wirelessly charge a smartphone from across a room. Guard beams (illuminated here in red for visibility) prevent human contact with the charging beam by triggering the beam’s automatic shut-off.

Mobile devices and WiFi have given people the freedom to access information and accomplish tasks on the move, but there is still one area in which we remain tethered to the old way of doing things: the power cord. No matter what fancy features or sleek designs are built into the latest devices, they still run on a battery — which means they have to be plugged into the wall to recharge. But that could change thanks to a team of researchers led by Allen School professor Shyam Gollakota and Physics and Electrical Engineering professor Arka Majumdar, who have developed the first laser-powered wireless charging solution to safely and quickly charge mobile devices from across a room — potentially liberating us from those pesky power cords for good.

The team set out to create an end-to-end power delivery system that is practical and efficient as well as safe. To satisfy the first two criteria, the researchers aimed to adhere to the form-factor requirements of a smartphone while minimizing the need for instrumentation of the environment. The resulting system consists of two main components: a laser power source capable of delivering a charge at distance, and a compact receiver that attaches to the back of a smartphone. Power comes from a laser emitter configured produce a focused beam in the near-infrared spectrum. That beam charges the smartphone via a small array of photovoltaic cells mounted on the back of the device to convert the beam’s optical power to electrical power.

To prevent overheating, the cell array is paired with a thermoelectric generator that is mounted on an aluminum heatsink to dissipate excess heat from the beam. The generator harvests some of the heat that would otherwise be wasted. Instead of requiring the laser emitter to scan the room for devices, which is inefficient and time-consuming, the team developed an acoustic localization system that relies on a series of chirps emitted by the device, in this case a smartphone, to be charged. These chirps are inaudible to human ears, but capable of being picked up by the microphones built into the emitter. 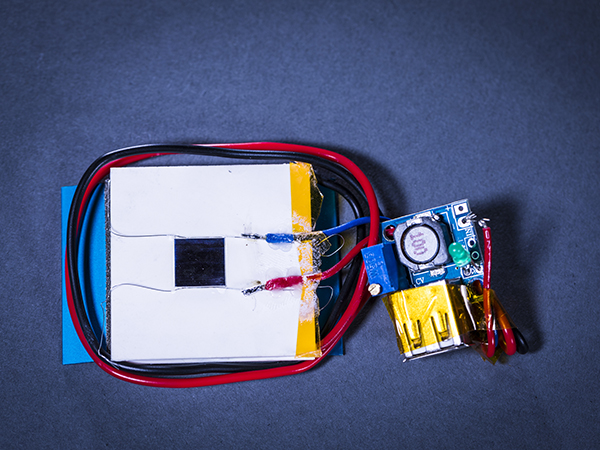 The receiver, which consists of a photovoltaic cell array attached to a thermoelectric generator mounted on an aluminum heatsink, is only 8 mm thick and 40 mm wide.

“This acoustic localization system ensures that the emitter can detect when a user has set the smartphone on the charging surface, which can be an ordinary location like a table across the room,” explained Vikram Iyer, a Ph.D. student in electrical engineering who works in the Allen School’s Networks & Mobile Systems Lab. Iyer is co-lead author of the research paper presenting the team’s work, which was published in the Proceedings of the Association for Computing Machinery on Interactive, Mobile, Wearable and Ubiquitous Technologies (IMWUT).

While power delivery and heat dissipation presented interesting technical challenges, the team also had to contend with the significant question of human safety. Due to the level of concentrated power required from the laser to deliver a strong enough charge wirelessly and from distance, the team had to devise a foolproof way to prevent humans and objects from inadvertently coming into contact with the beam.

“Safety was our focus in designing this system,” Gollakota said. “We have designed, constructed and tested this laser-based charging system with a rapid-response safety mechanism, which ensures that the laser emitter will terminate the charging beam before a person comes into the path of the laser.”

The team could not rely on cameras, acoustic tracking, or other motion detection methods, because those approaches would all introduce an unacceptable delay between detection and shut-off. Instead, the team turned to optics, incorporating a set of “guard beams” — harmless, low-power lasers that surround the charging beam. A set of 3D-printed retroflectors arranged around the power cell reflect the guard beams back to photodiodes on the laser emitter. When one of the guard beams detects an object, such as a human arm, moving into its path, it causes the charging beam to automatically shut off. Because the guard beam operates at the speed of light, it can trigger this shut-off within a fraction of a second — faster than the maximum speed of human motion. 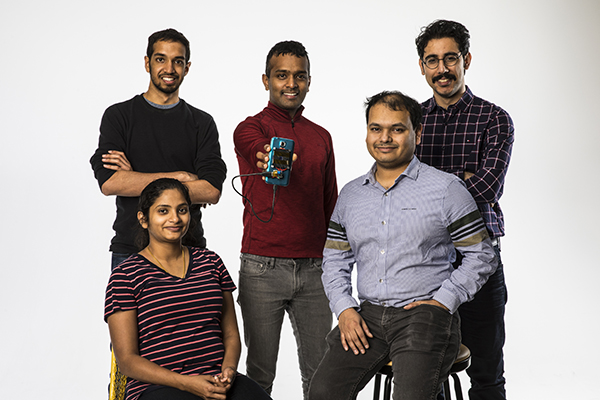 The team demonstrated its prototype can charge a smartphone at roughly the same speed as a standard USB cable. The laser charging system is capable of delivering two watts of power in a steady stream from a distance of 4.3 meters, or roughly 14 feet, to an area of roughly 15 square inches in size. The system can be modified to expand the charging area to more than three feet, like a tabletop, from a distance of 12 meters or nearly 40 feet.

The UW team’s laser-based system has several advantages over existing approaches to wireless power. Near-field magnetic induction, for example, is a commercially available technology that is safe and efficient, but also limited in range. Methods for harvesting ambient power from far field microwave sources, on the other hand, can handle a longer range, but are suitable only for ultra-low power applications requiring only a few microwatts of power. The researchers anticipate that their approach can be extended to charging a range of devices, including tablets, cameras, and desktop computers.