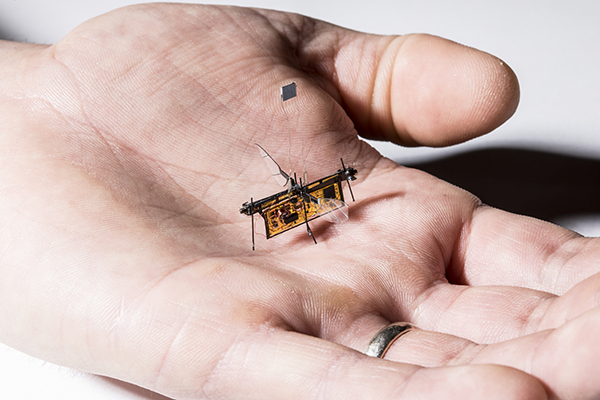 A team of University of Washington researchers has achieved liftoff of the world’s lightest wireless flying robotic insect, RoboFly. Developed by members of the Allen School’s Networks & Mobile Systems Lab and the Department of Mechanical Engineering’s Autonomous Insect Robotics Lab, RoboFly represents a milestone in autonomous flight that could launch a new wave of innovation in aerial robotics.

Insect-scale robots tend to rely on wire tethers for power and control, as existing systems for supplying the energy required for flight exceed their tiny load capacity. The wired approach may keep the load light, but it limits the robots’ range and mobility. In order to cut the cord, UW researchers would have to devise a system that could power their robot insect without weighing it down.

In order to find a solution, the interdisciplinary team led by Allen School professor Shyam Gollakota and Mechanical Engineering professor Sawyer Fuller took its inspiration from nature. RoboFly’s biologically inspired design features dual flapping wings driven by a pair of piezoelectric actuators. A lightweight microcontroller directs the wings’ action by issuing a series of pulses mimicking that of a biological fly’s wings.

“The microcontroller acts like a real fly’s brain telling wing muscles when to fire,” explained Vikram Iyer, a Ph.D. student in Electrical Engineering who works with Gollakota.

To power their novel system in the absence of cords or clunky batteries, Iyer and his colleagues direct a laser beam at a tiny photovoltaic cell mounted onto RoboFly. The cell converts the beam’s light into electricity that can be used by the onboard components. Those components include the first sub-100 milligram boost converter and piezo driver, which the researchers integrated into their flight control system to amplify the voltage generated by the cell from seven to more than 200 volts — the amount of energy required to power the flapping of RoboFly’s wings during takeoff.

“It was the most efficient way to quickly transmit a lot of power to RoboFly without adding much weight,” said Gollakota, who believes future designs could potentially rely on power harvested from ambient radiofrequency signals or even miniature batteries to augment lasers. 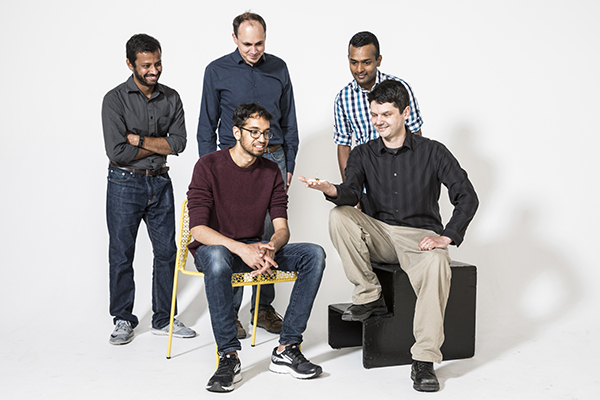 When fully assembled, RoboFly is slightly larger than an actual fly and weighs in at just 190 mg — making it the lightest aerial robot to have achieved wireless flight. Currently, RoboFly can take off and land but cannot venture further afield without losing the required line of sight with its laser power source. However, with additional research and refinement, the team envisions a day when RoboFly and its ilk will put their small and nimble form factor to work for a variety of applications — from detecting environmental hazards, to aiding search and rescue, to surveying agricultural crops.

“Before now, the concept of wireless insect-sized flying robots was science fiction,” said Fuller, who contributed to the design of the wired RoboBee. “Our new wireless RoboFly shows they’re much closer to real life.”

The team — which also includes ME Ph.D. student and lead author Johannes James, and ME Ph.D. student Yogesh Chukewad — will present its findings at the International Conference on Robotics and Automation (ICRA 2018) in Brisbane, Australia next week.