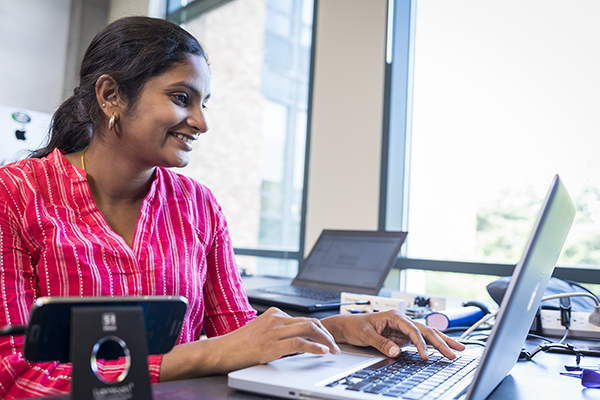 Allen School Ph.D. student Rajalakshmi Nandakumar has been recognized with a Paul Baran Young Scholar Award from the Marconi Society for her work on mobile apps capable of detecting potentially life-threatening health issues. She is the first Allen School student to receive the award, which honors outstanding early-career researchers in wireless communications and the internet. Young Scholars are selected by an international panel of engineers from industry and academia. According to internet pioneer and Marconi Society Chairman Vinton Cerf, Nandakumar represents those qualities that the organization aims to promote through the program.

“Our Young Scholar award attracts the world’s brightest young communications researchers,” he said. “Rajalakshmi embodies every characteristic that we seek—unparalleled intellectual capability, entrepreneurial spirit, and the vision to use her work to better humankind.”

Nandakumar is a researcher in the Allen School’s Networks & Mobile Systems Lab, where she works with professor Shyam Gollakota on a range of projects that leverage the increasingly sophisticated sensing capabilities of smart devices to improve health and quality of life. 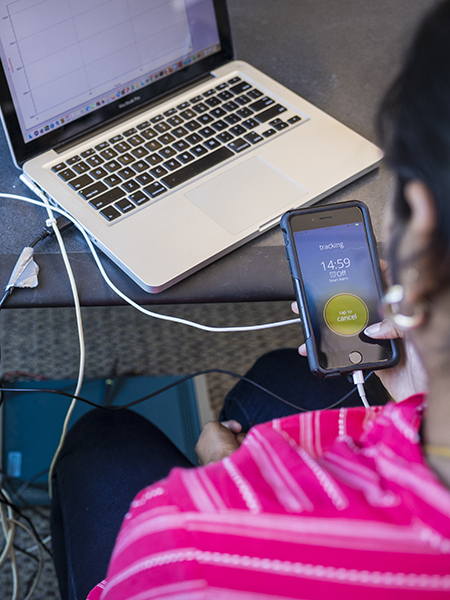 “Rajalakshmi has a knack for selecting problems with high social impact,” observed Gollakota. “What’s incredible is that she has developed technology that seems like science fiction and has gotten it adopted by hundreds of thousands of people in the real world.”

Gollakota is referring to ApneaApp, a contactless smartphone app that Nandakumar developed to measure minute changes in a person’s respiration and movement during sleep. The app analyzes those measurements to detect whether a person is suffering from sleep apnea, a breathing disorder that affects more than 18 million adults in the United States alone. The condition often goes undiagnosed, as the usual methods of identifying sleep apnea involve either an expensive polysomnography test requiring an overnight stay in a hospital or sleep clinic, or the use of in-home systems that tend to have high failure rates. Taking inspiration from how bats navigate, Nandakumar turned a smartphone into an active sonar system that can be used to monitor an individual’s sleep from the comfort of their own bedroom, without any special instrumentation.

Nandakumar’s work on ApneaApp earned her the UW CoMotion Graduate Innovator Award in 2016. The technology, which was developed in collaboration with Dr. Nathaniel Watson of the UW Medicine Sleep Clinic, was subsequently licensed by ResMed, a global leader in the sleep industry. The company built the capability into its SleepScore app released earlier this summer to enable individuals to track their sleep quality and share data with their physicians.

Nandakumar chose to focus on mobile apps for health based on her experience growing up in India with a father in the healthcare industry, which exposed her to many of the issues she is trying to address through her research. She also liked the idea of working on projects that have far-reaching impact outside of the lab. 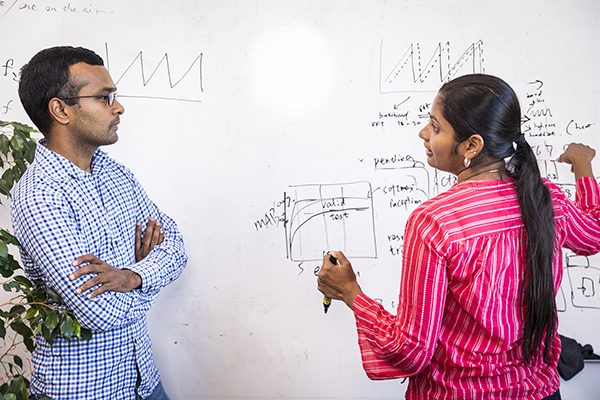 “The best part of my work is seeing real people using my technology and knowing that it benefits their well-being,” Nandakumar told the Marconi Society. “As a computer scientist, I find that very fulfilling.”

Nandakumar has since turned her attention to another pressing public health issue: the opioid epidemic. For her latest project, she is exploring how to use a smartphone and sonar to monitor a person’s condition and summon help in the event of an overdose. Around 100 people in the United States die each day from opioid use. It will be the latest in a line of projects that have sought to extend the capabilities of mobile devices beyond mere communication.

“It is rare for a graduate student to have such impact with even one application, and she is doing it time and again,” Gollakota said.

Nandakumar and her three fellow Young Scholar recipients will be formally recognized next month at the Marconi Society’s symposium in Bologna, Italy.

Photos by Mark Stone/University of Washington

Published by Kristin Osborne on September 11, 2018