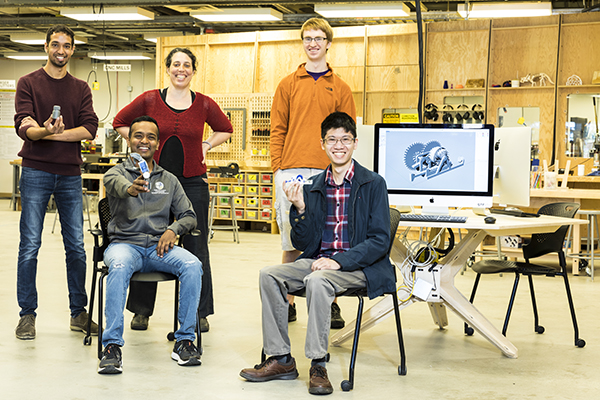 Last year, researchers in the Allen School’s Networks & Mobile Systems Lab unveiled a set of prototypes and schematics that represented the first 3D-printed objects capable of communicating over WiFi without built-in electronics. Now, those smart objects are about to get even smarter thanks to new built-in analytics that can wirelessly track and store data about their use — even when they are out of the range of WiFi.

The new system is the product of a collaboration between the original group, led by professor Shyam Gollakota, and the Allen School’s Make4All Group led by professor Jennifer Mankoff. Together, this multidisciplinary team demonstrated how 3D-printed items imbued with analytic capabilities could be used for a variety of applications to improve quality of life or potentially even save a life, from smart assistive devices that absorb feedback from the user, to smart pill bottles that record when a patient last took their medication.

But first, they had to find a way to perform room-scale sensing while registering a range of bi-directional and rotational movements. The team also needed an effective means of storing and retrieving the collected data even if the object does not maintain a WiFi connection while relying on plastic parts. “Using plastic for these applications means you don’t have to worry about batteries running out for your device getting wet,” Gollakota noted in a UW News release. “But if we really want to transform 3D-printed objects into smart objects, we need mechanisms to monitor and store data.”

The team began by building on previous, groundbreaking work from Gollakota and colleagues that successfully married mechanical gears and switches with the digital capabilities of backscatter communication. Backscatter enables devices to transmit data by reflecting ambient radio frequency (RF) signals that are decoded by a WiFi receiver. For this project, the researchers aimed to extend the transmission range of their first 3D-printed objects to room scale — a necessity if such devices are to be practical for everyday living. By applying interference cancellation techniques, which enabled the receivers to pick up weaker backscattered signals from farther away, the team demonstrated their devices could successfully transmit data from a distance of four meters.

In 3D-printed smart objects, a switch made of conductive plastic filament, not electronic components, is used to transmit the data when activated by the mechanical turning of a gear. The original design contained a uni-directional switch with a single antenna. But as Vikram Iyer, a Ph.D. student in the Department of Electrical & Computer Engineering who works with Gollakota, explained, they had to switch up their approach to sense bi-directional movement. “This time we have two antennas, one on top and one on bottom, that can be contacted by a switch attached to a gear,” he said. “So opening a pill bottle cap moves the gear in one direction, which pushes the switch to contact one of the two antennas. And then closing the pill bottle cap turns the gear in the opposite direction, and the switch hits the other antenna.” 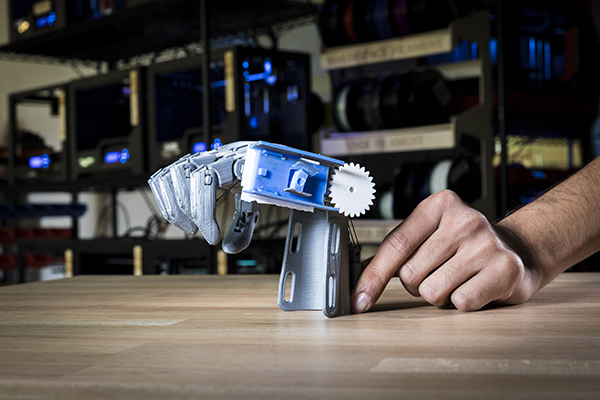 A 3D-printed e-NABLE prosthetic device that collects and stores data about its use. Mark Stone/University of Washington

To determine the direction of movement, Iyer and his colleagues embedded an asymmetric code into the gear’s teeth. As the gear turns, the specific direction of movement is indicated via the encoded sequence — “like Morse code,” according to Allen School Ph.D. student Justin Chan.

The team, which also includes undergraduate Ian Culhane of the Department of Mechanical Engineering, aimed to produce “anywhere analytics” by enabling the devices to collect and store data over time even as the user moves in and out of WiFi range. To accomplish this, the researchers developed a mechanical data capture and storage mechanism that relies on a ratchet system. The system holds state as data is collected out of range of WiFi; when the device is once again within range, the press of a button releases the ratchet so it can wirelessly transmit the stored data. As proof of concept, the team designed a special insulin pen that employs the ratchet system to store a user’s dosage history, based on how far the syringe’s plunger has been depressed.

Having solved the technical issues, the team was interested in finding out whether its approach could benefit the users of a particular class of 3D-printed objects: customized prosthetic devices. While the growing popularity and affordability of 3D printing has the potential to lower barriers of access to such specialized equipment, there is no practical way to track what happens with the devices once they are with the user — and evidence suggests that the abandonment rate for assistive technologies could be as high as 75%. But armed with embedded analytics, technologies such as the e-NABLE prosthetic limb, which assists children with hand abnormalities, could potentially track frequency of use as well as finer-grained data on rotation angle and direction to paint a fuller picture of how users are – or aren’t – benefiting from these devices.

For Mankoff, who has done extensive work in this area, the combination of 3D printing and backscatter technology is an opportunity to not only get to the root of those statistics, but hopefully, to turn the numbers around. “This system will give us a higher-fidelity picture of what is going on,” Mankoff explained. “Right now we don’t have a way of tracking if and how people are using e-NABLE hands. Ultimately what I’d like to do with these data is predict whether or not people are going to abandon a device based on how they’re using it.”

The team will present its research paper at the Association for Computing Machinery’s Symposium on User Interface Software and Technology (UIST 2018) next week in Berlin, Germany.

Published by Kristin Osborne on October 10, 2018