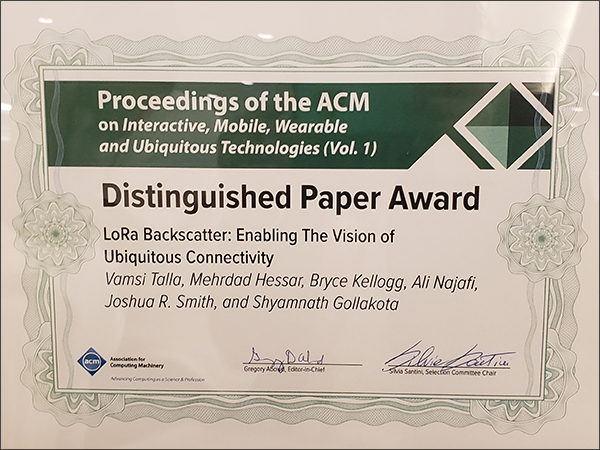 Researchers in the Allen School and University of Washington’s Department of Electrical & Computer Engineering were recognized this week with the IMWUT Vol 1. Distinguished Paper Award for their 2017 paper, “LoRa Backscatter: Enabling the Vision of Ubiquitous Connectivity.” The award, which was announced during the Ubicomp 2018 conference in Singapore, recognizes outstanding research contributions published in the Proceedings of the ACM on Interactive, Mobile, Wearable and Ubiquitous Technologies.

Long-range backscatter is the first system of its kind to enable low-cost, wide-area connectivity for a range of objects and devices while consuming 1000x less power than existing technologies. Until now, devices capable of communicating over long distances were bulky and consumed significant amounts of power, whereas the communication range for lighter, less power-hungry devices was short. Long-range backscatter offers the best of both worlds: a light-weight form factor that requires mere microwatts of power that is also capable of transmitting data over a distance of 2.8 kilometers. It manages this by reflecting radio frequency (RF) signals onto sensors that, in turn, synthesize and transmit data to a receiver for decoding, using chirp spread spectrum (CSS) modulation to amplify the signals over longer distances. Other noteworthy technical contributions include the first backscatter harmonic cancellation mechanism to combat sideband interference, and a link-layer protocol that enables multiple devices to share the spectrum.

The project represented a significant breakthrough in the effort to embed connectivity into everyday objects to enable a range of new applications, from smart agriculture to personalized medicine. It earned the notice of Paul Allen, who highlighted long-range backscatter as one of 10 innovations “making the world a better place” to have emerged from the Allen School during its first year. The project was featured on Allen’s blog back in March to coincide with the anniversary of the founding of the school that bears his name.

For more on this project, see the original UW News release here and a related blog post here. Visit the project website here.

Congratulations to the entire team!