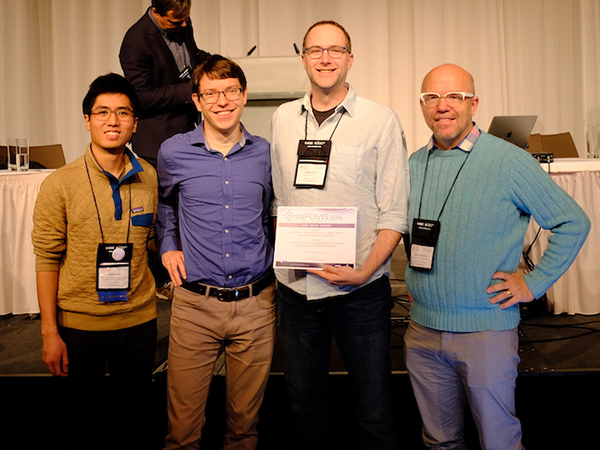 A team of researchers in the Allen School’s Interactive Data Lab (IDL) collected the Best Paper Award at InfoVis 2018 for Draco, an open-source, constraint-based system that formalizes guidelines for visualization design and their application in visualization tools. Draco provides a one-stop shop for researchers and practitioners to apply and test a set of accepted design principles and preferences and to make adjustments to their visualizations based on the results.

“There is a robust, ongoing line of research devoted to understanding how people interpret visualizations, but that guidance is ever-changing and tends to make its way very slowly into practical application,” said Allen School Ph.D. student Dominik Moritz, lead author on the paper. “Draco formalizes that knowledge into a tool that enables researchers and practitioners to build effective visualizations that are grounded in the latest research, while offering the flexibility to make design trade-offs based on user preference.”

Draco encodes the building blocks of visualization, such as input data and visualization type, into a set of logical facts based on an extension of Vega-Lite, a high-level language for describing interactive visualizations. It combines that with an encoding of accepted design principles and preferences as a set of hard and soft constraints that govern the appearance of those facts. The system employs a constraint solver to reason about visualization design based on the encoded guidelines and user inputs. While Draco requires that hard constraints — such as the use of a valid mark type like bar, line, point, etc. — must be satisfied, the soft constraints are assigned varying weights based on visual perception experiments and generally accepted best practices. This allows for a degree of flexibility for the user to make design trade-offs based on their own preferences or the conventions of their particular field. 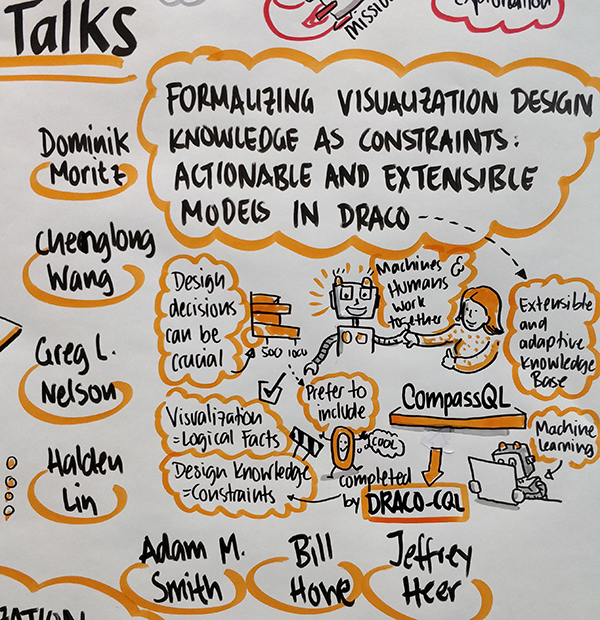 The constraint-based approach has another advantage in that it allows Draco to actively assist the user by recommending and ranking visualization designs based on a query, or partial specification, in which the user has left some attributes of their desired visualization blank. The user can also test their visualizations in Draco, which will alert them to violations of the encoded guidelines “similarly to how the automatic spell-check function operates in a word processing program,” Moritz explained. The user can then decide whether and how to adjust their graphic based on the severity of the violation. As people’s preferences and formal design theory evolve, the team envisions the design community adding new constraints — and adjusting the relative weights of existing ones — to incorporate the latest best practices.

Moritz and Heer were also part of the team that developed Vega-Lite, the visualization language that underpins Draco which earned a Best Paper Award at InfoVis 2016. For more on Draco, check out the Interactive Data Lab’s Medium post here, and read the research paper here.

Published by Kristin Osborne on November 5, 2018