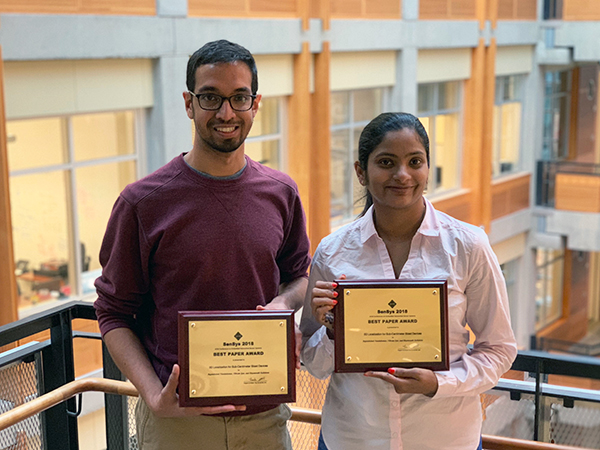 Researchers in the Allen School’s Networks & Mobile Systems Lab have developed the first low-power 3D localization system for sub-centimeter sized devices. The system, µLocate, enables continuous object tracking on mobile devices at distances of up to 60 meters — even through walls — while consuming mere microwatts of power. The team behind µLocate was recognized with a Best Paper Award at the recent Conference on Embedded Networked Sensor Systems (SenSys 2018) organized by the Association for Computing Machinery in Shenzhen, China — demonstrating once again that good things really do come in small packages.

Localization is integral to the Internet of Things (IoT). While WiFi radios and ultra-wideband radios are capable of fulfilling this function, their power needs are such that they can only operate for about a month using smaller coin cell or button cell batteries. On the other hand, radio frequency identification tags (RFID) require significantly less power and are a suitable size, but their limited range and inconsistent operation through barriers make them unsuitable for use in whole-home and commercial IoT applications.

“When it comes to tracking IoT devices, existing localization systems typically hit a wall due to their functional limitations or outsize power needs that make them impractical for real-world use.” observed Allen School Ph.D. student Rajalakshmi Nandakumar, lead author on the paper. “µLocate overcomes these barriers by eliminating the need for bulky batteries while enabling us to localize across multiple rooms using devices that are smaller than a penny.”

Nandakumar and her colleagues — Electrical & Computer Engineering Ph.D. student Vikram Iyer and Allen School professor Shyam Gollakota — developed a novel architecture that builds on the lab’s previous, pioneering work on long-range backscatter. That project introduced the first low-power, wide-area backscatter communication system using chirp spread spectrum (CSS) modulation. For this latest iteration, the team’s hardware design consists of an access point and a receiver that incorporates a low-power microcontroller equipped with a built-in oscillator. The access point transmits the CSS signal, which the receiver shifts by 1-2 MHz before backscattering it to the access point. The system is designed to operate concurrently across the 900 MHz, 2.4 GHz, and 5 GHz ISM radio bands; the access point extracts and combines the phase information from the backscattered signals across the spectrum to localize the target.

The team designed two diminutive receiver prototypes, each of which could last between five and 10 years running on two button cell batteries: a multi-band prototype capable of operating across the aforementioned ISM bands at longer range, and an even smaller single-band prototype that operates at 5 GHz for short-range applications. The researchers evaluated µLocate in an open field and an office building to test its performance in line-of-sight and walled settings, respectively, demonstrating its ability to return a location value within 70 milliseconds at ranges of up to 60 meters. They also deployed the system in multiple real-world scenarios, including several single- and multi-story residences and across multiple rooms in a hospital wing.

“This was our lab’s first foray into both wireless device localization and the design of tiny, programmable devices,” noted Gollakota. “We’re excited that our work in this new line of research is already being recognized within the sensing community.”

To learn more about µLocate, read the research paper here.

Published by Kristin Osborne on November 29, 2018