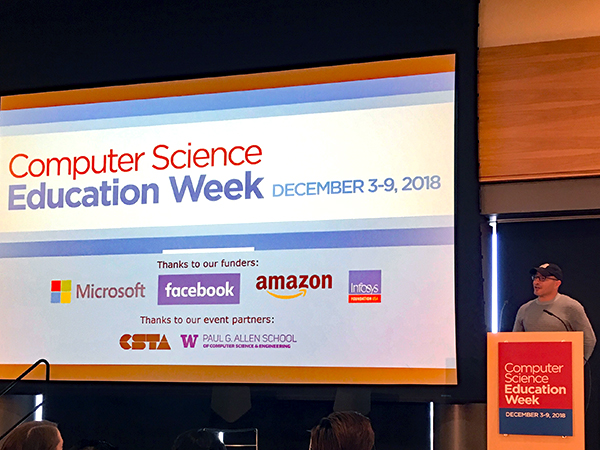 The Allen School teamed up with Code.org and the Computer Science Teachers Association (CSTA) on Monday to host the kickoff event marking the 2018 start of Computer Science Education Week and the largest-ever Hour of Code.  The event featured special guests Melinda Gates, co-chair and trustee of the Bill & Melinda Gates Foundation, and Brad Smith, president and chief legal officer of Microsoft.

Gates engaged in a question and answer session with a local student about her inspiration for pursuing computer science and how efforts to engage girls in computer science early are helping to address the gender gap in computing. In addition to giving a shout-out to her high school math teacher, Mrs. Susan Bauer, Gates acknowledged the efforts of the Allen School that have seen us increase our percentage of CS degrees awarded to women to nearly twice the national average. “This isn’t because of chance,” Gates noted. “It’s because they worked at it.”

Noting that she was lucky to have a teacher who introduced her to computer science 35 years ago, Gates hoped that today’s students wouldn’t have to rely on luck to discover computing thanks to programs like Code.org, Girls Who Code, and Black Girls Code. “Not every girl is going to have a Mrs. Bauer to introduce her to computing,” Gates said. “But if we build the right support system, she won’t need one.”

In addition to energizing the room full of teachers, administrators, and students about engaging in computer science learning, Gates joined Code.org co-founder and CEO Hadi Partovi and CSTA Executive Director Jake Baskin in celebrating the recipients of the Champions for Computer Science Awards. These awards recognize individuals and organizations that are working to make computer science education accessible to everyone — including 2018 honoree and Allen School professor emeritus Richard Ladner. 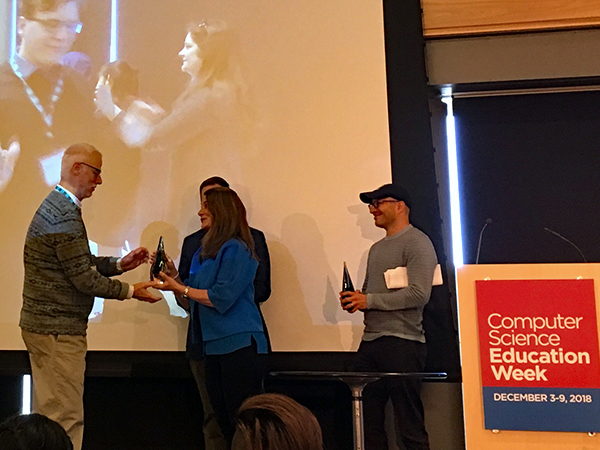 Ladner was named a Computer Science Champion based on his leadership in launching and growing AccessCSForAll, a set of curriculum and professional development tools that empower teachers and schools to make computer science accessible to K-12 students with disabilities. CSTA and Code.org credited Ladner and collaborators Andreas Stefik and the Quorum programming team, for their leadership in ensuring that the drive to increase CS educational opportunities is truly inclusive for all students. Happily, Ladner points out, the accessibility mindset is becoming more ingrained not just in education, but in industry, too — with more companies now focused on developing technologies and products that are built with accessibility in mind to serve the broadest community of users. “Accessibility is becoming mainstream,” Ladner said. “It’s not something one person does, it’s something everyone does.”

Smith — a longtime friend of the Allen School and a staunch advocate for computer science education, generally — ended the program on a high note by announcing Microsoft’s commitment of an additional $10 million to Code.org. The funding will support the organization’s efforts to make CS-related professional development available to teachers in every school, as well as its advocacy for state-level policies that will increase access to computer science education for K-12 students across the nation. 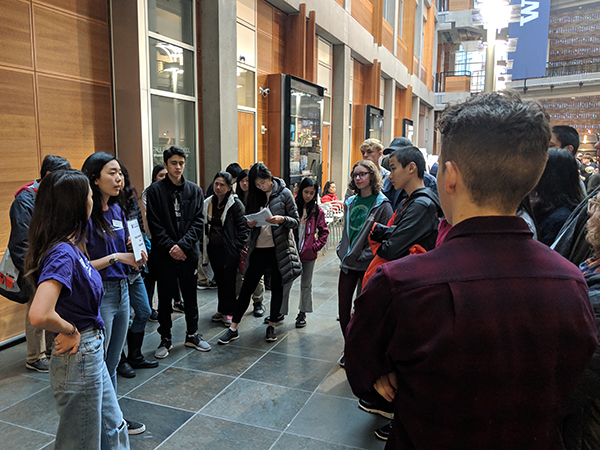 While today marked the official kickoff, the Allen School began celebrating Computer Science Education Week early, at our Computing Open House this past weekend. The open house is an annual tradition that coincides with both the start of CS Education Week and the birthday of computer programming pioneer Grace Hopper. More than 500 local students and parents descended upon the Paul G. Allen Center for Computer Science & Engineering for tours, research demos, and talks by industry representatives on how their computer science education helped them to launch fulfilling careers creating technologies that benefit people around the world. Students at the open house had a chance to learn about computer security, program an Edison robot, construct their own messages in binary and DNA, and get hands-on with the latest smartphone-based apps for mobile health.

Thanks to everyone who joined us, whether in person or online, to support computer science education — and congratulations to Richard and the team at Quorum for their much-deserved recognition!

Learn more about CS Education Week here and the Hour of Code here. View all of the Champions for Computer Science honorees here.

Published by Kristin Osborne on December 3, 2018