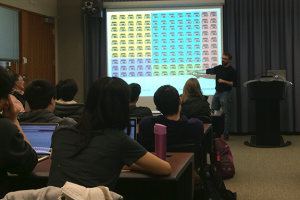 Today, UW CSE alum Ben Hindman (B.S. ’07), co-founder of data center operating system startup Mesosphere, offered current CSE undergrads advice on what to do when your path diverges from your plan, as part of our Leadership Seminar Series.

Among Ben’s top tips for students approaching life after CSE: “always be learning” (great advice regardless of what one does after graduation), and “love your co-workers” (emphasizing the importance of picking one’s partners, employees and investors carefully).

Ben’s first stop after earning his undergraduate degree at UW CSE was a brief stint at Google, followed by graduate school at UC Berkeley, where he co-created the Mesos data center kernel as an open source project. Twitter was among the companies that adopted Mesos to better manage resources in running their data center applications, enticing Ben away from academia in the process. Upon leaving Twitter three years later, instead of resuming his studies, Ben decided to go the entrepreneurial route by starting Mesosphere – a venture-backed company that recently surpassed 50 employees.

Ben was generous with his advice and candid about what daily life is like as a start-up executive. When asked about fundraising, Ben urged budding entrepreneurs to make sure they can articulate a compelling story about where the company came from and where it is going, calling it “the most important part of the pitch deck.” He also noted that team can trump technology, and both culture and communication are critical for building a successful company.

Ben closed by noting that in both life and business, there is only a handful of truly important decisions that one has to make along the way. “Figure out those questions,” he said, “and you will know what to focus on.”

Published by Kristin Osborne on February 24, 2015