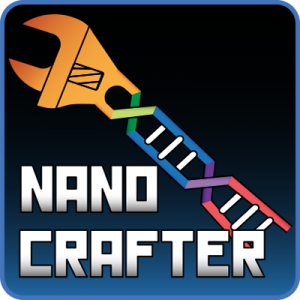 The team’s next scientific discovery game – Nanocrafter – is on the same trajectory. Nanocrafter is a synthetic biology game in which players use pieces of DNA to build everything from computer circuits to nanoscale machines.

The first academic paper analyzing the design and outcomes of Nanocrafter has just been accepted by the Foundations of Digital Games Conference. The paper, “Nanocrafter: Design and Evaluation of a DNA Nanotechnology Game,” will be presented during the 2015 conference that will take place June 22-25 in Pacific Grove, California.

Nanocrafter aims to accelerate synthetic biology research by challenging players to construct and simulate nanoscale devices using DNA strand displacement. The game functions as a “citizen science platform,” tapping into players’ competitive natures to crowdsource scientific discovery – a strategy that has been shown to be effective by the center’s popular protein-folding game, Foldit.

The conference paper discusses Nanocrafter’s design in terms of visualizations, interactions, introductory levels and scoring, and evaluates preliminary results based on an analysis of players’ creations. The Foundations of Digital Games Conference focuses on the scientific underpinnings of digital game design and the technologies used to develop them. Learn more here.

Nanocrafter previously won the award for “Best Serious Game, Special Emphasis Category, Use of Social Media” at the Serious Games Showcase and Challenge in December.

Published by Kristin Osborne on April 6, 2015