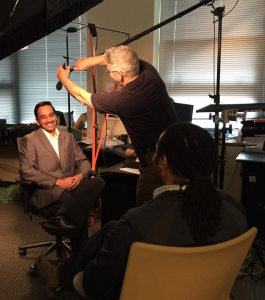 Raj Rao is ready for his closeup with NBC Learn

On Wednesday, June 10th, CSE professor Raj Rao, director of the National Science Foundation’s Center for Sensorimotor Neural Engineering, will participate in a Twitter chat hosted by NBC Learn as part of its “Mysteries of the Brain” series.

Raj spoke to NBC Learn about brain-computer interfaces as part of a collection of eight videos, produced in partnership with the NSF, that explore the latest research into how the brain works with the help of leading scientists in the field. NBC Learn plans to make lesson plans for middle and high school students, developed by the National Science Teachers Association, available for use in connection with the series later this summer.

Watch the video series, including the interview with Raj and a demonstration of his brain-computer interface research, here.

Join the Twitter chat with Raj and his fellow brain researchers Wednesday afternoon from 3:00 to 4:00 pm Pacific (6:00 to 7:00 pm Eastern) using the hashtag #ExplainTheBrain and by following @NeuralE_Ctr on Twitter.

Read past blog coverage of Raj and his research here, here and here.

Published by Kristin Osborne on June 9, 2015