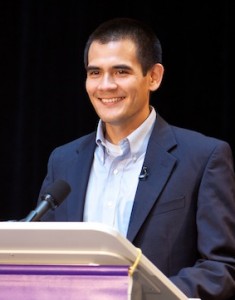 UW CSE professor Yoshi Kohno was quoted in this week’s big, scary story in The Washington Post on hacking and the Internet of Things, inspired by his past research on the vulnerability of motor vehicle systems.

Last fall, Yoshi and a team of students were featured in this segment that aired on 60 Minutes in which they remotely took control of a car driven around a UW parking lot (a deserted UW parking lot!) by correspondent Lesley Stahl. Recently, another team of researchers demonstrated the ability to hack into another make and model on a public highway – once again bringing the topic of motor vehicle security in an increasingly connected world to the fore.

Noting that the cars on the market today are “computers on wheels,” the article, “Hacks on the Highway,” explains what makes them so vulnerable:

“Once inside, most computer systems on modern vehicles are somehow connected, if only indirectly. Researchers who have hacked their way into computers that control dashboard displays, lighting systems or air bags have found their way to ones running transmission systems, engine cylinders and, in the most advanced cars, steering controls. Nearly all of these systems speak a common digital language, a computer protocol created in the 1980s when only motorists and their mechanics had access to critical vehicle controls….

“Scientists from the University of Washington and the University of California at San Diego reported in 2010 that, with physical access to a car, they could control almost any computerized system within it. When some critics questioned the realism of that scenario — if you were in the car, you could simply turn off the engine or hit the brakes yourself, they said — the researchers found a way to do many of the same things remotely….

“’We can do this from a thousand miles away,’ said Tadayoshi Kohno, one of the University of Washington researchers who worked on the project, published in 2011.”

The article provides an in-depth look at the factors that make automobiles vulnerable and how regulators are trying to address the threat. It is definitely worth a read if you drive a car (particularly if you drive a Jeep). Check out the full article here, our past blog post on the 60 Minutes demonstration here, and the 2011 article by The New York Times on the UW and UCSD research here.