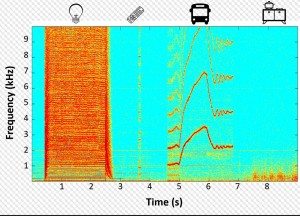 Earlier this month, we reported on MagnifiSense, a new low-power, wearable sensor system that tracks an individual’s usage of various devices that was developed by a team of UW CSE and EE researchers in the Ubiquitous Computing Lab led by professor Shwetak Patel.

“The coolest thing about a new electromagnetic-radiation sensing device from the University of Washington might be the elegant simplicity of its design.

“Or maybe it’s the fact that the wearable tech gadget could be put to important uses, such as measuring someone’s carbon footprint, helping prevent injuries for older people with dementia, and blocking inappropriate content from kids when they turn on a computer or TV.

“Or perhaps the best thing about the MagnifiSense sensor, which was built from off-the-shelf materials bought at RadioShack, is that its potential uses are still being discovered….

“The MagnifiSense project began as something seemingly less ambitious than a tool for a greener-living or making grandma and the kids safer.

“‘Our original problem we were trying to solve was figuring out what side of the car you were sitting on,’ Wang said.”

Published by Kristin Osborne on September 16, 2015