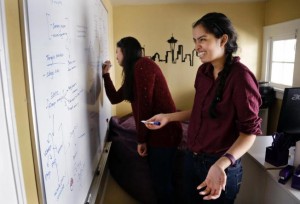 An Associated Press story that is being picked up by hundreds of outlets nationwide highlights the efforts of UW CSE and others to recruit and retain more women in the computing field. The article features UW CSE professor Ed Lazowska and students Megan Hopp, Meredith Lampe, Aishwarya Mandyam and Karishma Mandyam sharing their perspectives on what works when it comes to encouraging women to consider a career in computer science.

“Last June, 31 percent of UW’s computer science undergraduate degrees were awarded to women, more than twice the national average. Nationwide, just 14 percent of computer-science college graduates were women in 2014, according to a Computing Research Association survey.

“‘There’s no silver bullet. You have to do lots of little things all the time,’ said Ed Lazowska, UW professor of computer science and engineering. UW has introduced K-12 students and teachers to computer science through summer camps. A seminar explores the role of women in computer science, and about 40 percent of the school’s teaching assistants are women.

Megan Hopp, a UW senior, said it was inspiring to see so many female teaching assistants when she took the intro courses. She’s now a teaching assistant for an upper level course and makes a point to reach out to other female students to tell them to consider the field.

She had not considered computer science because she thought it was too nerdy, but her older brother pestered her to take the introductory course.

“‘I had that epiphany moment and realized how much I love it,’ she said.”

Read the full article here, and check out past coverage of UW CSE’s efforts on gender diversity here and here.

Published by Kristin Osborne on October 23, 2015