Seattle Times explores the data-driven commute, with a little help from UW CSE 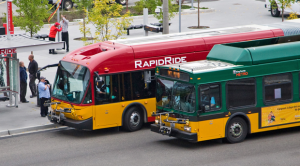 The Seattle Times published an article yesterday examining how developers are using data to tame traffic and aid commuters in the region. One of the featured apps, OneBusAway, originated as a UW CSE research project to help public transit users plan their trip by providing real-time system information. Another, Access Map, was developed by a team of students advised by UW CSE professor Alan Borning and Anat Caspi, executive director of UW CSE’s Taskar Center for Accessible Technology, to enable people with limited mobility to identify accessible routes throughout the city. The app, which won first place at the City of Seattle’s Hack the Commute competition, was further refined as part of the UW eScience Institute’s Data Science for Social Good program over the summer.

“Commuters have turned to a variety of apps for relief — from Waze to OneBusAway. And behind the scenes, governments, private companies and garage hobbyists are tinkering with a mixture of public and private data that feeds those apps. They believe better information could help make stressed infrastructure more efficient.

Read the full article, which also quotes UW CSE Ph.D. alum (and creator of OneBusAway) Brian Ferris, here. Check out a sampling of our previous coverage of OneBusAway here and here, and of Access Map here and here.

Published by Kristin Osborne on October 27, 2015