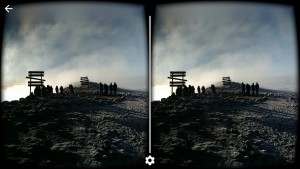 UW CSE Professor Steve Seitz’s team of virtual reality researchers at Google released a new app today called Cardboard Camera, the next step in the company’s effort to bring virtual reality to the masses. The app, which is free, allows anyone with an Android smartphone to create 360-degree three-dimensional photos that can be viewed using the Google Cardboard virtual reality viewer.

“Anyone who’s taken a panoramic shot using their smartphone already knows how to use this app: You hold your phone in a vertical position, tap the camera button, and move in a circle. The only difference is that, unlike regular panoramic pictures, you make a full 360-degree turn. A snippet of sound also gets recorded as you’re capturing the photo.

“The result is pretty striking: a three-dimensional panorama where near things look near, far things look far, and you can look in front of you, to your sides, or crane your neck all the way behind you to see the entire captured scene….”

The app uses computational photography and computer vision to calculate 3-D, negating the need for a special camera.

Published by Kristin Osborne on December 3, 2015