UW CSE students in the Husky 100 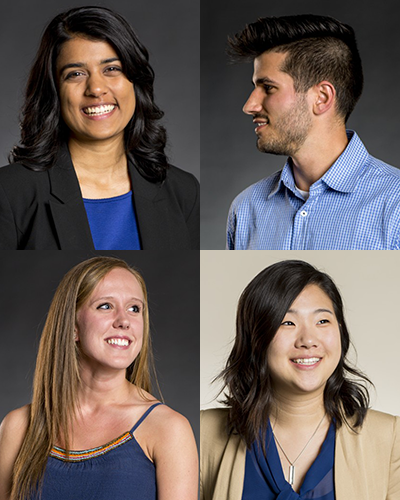 Four UW CSE students—Krittika D’Silva, Victor Farkas, Karolina Pyszkiewicz and Sarah Yu—have been selected as members of the inaugural class of the Husky 100. This new award recognizes 100 undergraduate and graduate students from across the three UW campuses who are making the most of their time as members of the UW community—and making a difference inside and outside of the classroom.

Krittika D’Silva is a senior majoring in computer engineering and bioengineering. She works with UW CSE professor Luis Ceze in the Molecular Information Systems Lab (MISL) on a groundbreaking project that uses DNA molecules for long-term data storage. Previously, D’Silva worked with the late UW CSE professor Gaetano Borriello and Ph.D. alum Nicki Dell on the development of smartphone apps to improve health care for low-income people in remote regions. She also spent more than two years as a research assistant in the Department of Bioengineering on improving the design of prosthetic devices to increase patient comfort. D’Silva plans to pursue a Ph.D. in computer science at Cambridge University as a Gates Cambridge Scholar.

Victor Farkas is a senior computer science major who arrived at the UW four years ago from Slovakia after accepting an athletic scholarship to join the UW men’s tennis team. In his freshman year, Farkas successfully managed his academic and athletic responsibilities and overcame the language barrier to earn the highest grade point average among UW student-athletes. He has exhibited leadership on and off the court as co-captain of the tennis team, a research assistant in the Robotics & State Estimation Lab, and a teaching assistant for CSE’s Computer Security course. Farkas has completed internships at Amazon, Google and International Software, and he plans to extend his time at the UW to complete CSE’s fifth-year master’s program.

Karolina Pyszkiewicz is a junior who earned direct admission into the computer science major from Seattle’s Holy Names high school. She is generous in volunteering her time to various CSE outreach activities and particularly effective at engaging young women in computer science, having served as a counselor for UW CSE’s DawgBytes summer day camps, an officer of the UW chapter of the Association for Computing Machinery (ACM), and a Google Student Ambassador. Pyszkiewicz completed an internship at Microsoft while still in high school, and has completed internships at Facebook and Google since her arrival at UW CSE. In addition to being a UW CSE endowed scholarship recipient, she was named a Washington State Opportunity Scholar and a NASA Space Grant Scholar.

Sarah Yu is a senior majoring in computer science, economics and international studies. She spent last spring as a Cybersecurity Research Fellow in Microsoft’s Trustworthy Computing Group in partnership with the UW’s Jackson School of International Studies. Previously, Yu worked with the Seattle Red Cross as a Jackson-Munro Public Service Fellow, an award that aims to develop undergraduate students’ potential as leaders while working on a public service project. She has completed internships at Amazon and Lagoon Conservation, and for the past six years she has served in various capacities as a volunteer with the American Red Cross.

We are very proud to have Krittika, Victor, Karolina and Sarah as members of the UW CSE family. Learn more about the Husky 100 program here, and read profiles of the 2016 class here.