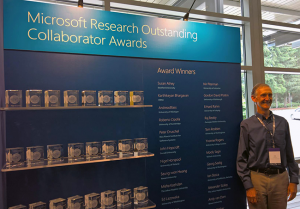 Ed Lazowska is recognized with the Outstanding Collaborator Award

Microsoft Research has recognized UW CSE professor Ed Lazowska, CSE and Electrical Engineering professors Shwetak Patel and Georg Seelig, and CSE Ph.D. alums Todd Millstein and Tao Xie, with Outstanding Collaborator Awards. The five are among 32 academics from around the world who are being honored for their contributions to the direction, visibility and value of Microsoft’s research and products.

Rick Rashid—the founder and former head of Microsoft Research, and now Chief Technology Officer for the company’s Applications and Services Group—announced the recipients at the 2016 Faculty Summit taking place in Redmond this week.

MSR recognized Lazowska as “one of the top leaders in the computer science research community.” The organization cited his 20 years of service on the Redmond lab’s Technical Advisory Board, during which he has provided guidance on the direction and impact of the organization’s research and on the development of collaborative initiatives. MSR also noted Lazowska’s long-standing work with government and academic organizations to advance the field of computing, including his leadership on the President’s Information Technology Advisory Committee, the NSF Computing and Information Science and Engineering Advisory Committee, the Computing Research Association, and the Computing Community Consortium.

Patel – “a prolific MSR collaborator” – was recognized for his work on novel interaction techniques and low-power sensing and his leadership on the Global Innovation Exchange (GIX), a partnership between the UW, China’s Tsinghua University, and Microsoft. In addition to his many research contributions, the organization called attention to Patel’s teaching and mentoring, noting that he has sent more than 10 students from his UbiComp Lab to MSR as interns—including four who have earned MSR Ph.D. Fellowships. A number of Patel’s students have taken full-time roles at Microsoft following graduation.

For the past five years, Seelig has collaborated with MSR Cambridge on programming information processing at the nanoscale using DNA. This work integrated software design tools from MSR with wet lab experiments designed and performed at the UW—leading to improvements in both and producing a DNA-based technology for implementing the computational core of complex molecular networks. Seelig is also a member of the UW’s Molecular Information Systems Lab, a recent collaboration with MSR Redmond aimed at developing the next generation of data storage that recently broke the record for the amount of digital data stored in strands of DNA.

Millstein earned his Ph.D. from UW CSE in 2003 working with Craig Chambers as part of UW CSE’s Cecil group. Now a professor of computer science at UCLA, Millstein was recognized by MSR for a decade of “broad and deep collaborations” focused on network verification, memory models, and predicate abstractions. Millstein’s partnership with MSR began as an intern while he was a graduate student at UW CSE, and he has continued to work with various MSR researchers in networking and programming languages since joining the UCLA faculty more than a decade ago.

Xie, now an associate professor in computer science and Willett Faculty Scholar at the University of Illinois at Urbana-Champaign, first engaged with Microsoft Research 15 years ago while pursuing his Ph.D. at UW working with David Notkin. His citation notes: “As a visiting researcher in the Research in Software Engineering (RiSE) group, he personally contributed a core search algorithm for the automated test generation feature IntelliTest, which shipped as part of Visual Studio 2015 Enterprise Edition. Even more influential were his frequent visits to Microsoft Research in Redmond and China, which spawned dozens of collaborative projects.”

This is a tremendous honor for the chosen individuals as well as for UW CSE as a whole. Visit the MSR Outstanding Collaborator Awards website here, and learn more about the honorees here.

Congratulations to all for their outstanding work, and thanks to Microsoft Research for being a terrific friend and collaborator!