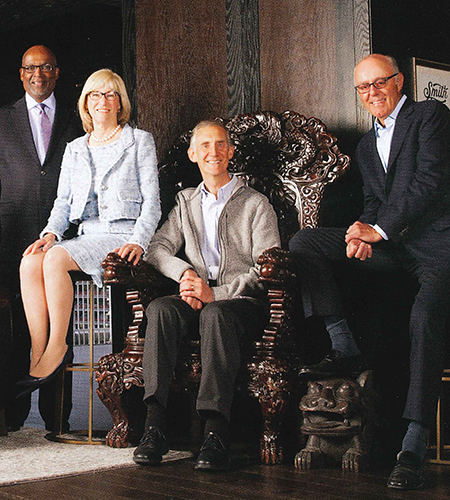 “Every city possesses its own, unique spirit — its zeitgeist. It’s what makes a metropolis move, defines its identity and propels it forward. We owe much of ours to our city’s shapers — those leaders, trendsetters and trailblazers who, over the past 50 years, have transformed the town in extraordinary ways…

“The people on these pages — living legends who have made a major contribution during the past five decades — are influential in their own right, but are also just a representative cross section of the many talented visionaries, big thinkers and risk-takers who have shaped our city into the remarkable place it is.”

With that, Seattle magazine introduced its list of the most influential Seattleites of the past 50 years in art, philanthropy, social justice, technology, and more. On that list of movers and shakers who have helped to define our city, which the magazine compiled to mark its 5oth anniversary, is UW CSE’s very own Ed Lazowska. He earns his place in the magazine’s Hall of Fame in the Technology and Business category based on his many contributions as an educator, researcher, volunteer, and advocate.

“His research and teaching of high-performance computing and communications systems, and his service on countless advisory councils and boards helped shape Seattle’s high-tech economy and influence the future of information technology,” noted the magazine.

Lazowska joins Paul Allen, Jeff Bezos, the Gates Family, Madrona Venture Group’s Tom Alberg, personalized medicine pioneer Lee Hood, and others credited with helping to transform Seattle into the vibrant center of innovation and economic dynamism that it is today. The magazine is planning a celebration of these luminaries and the city’s past, present and future on November 17 — find event information here.

Lazowska’s inclusion in Seattle magazine’s Hall of Fame is only the latest accolade inspired by his tireless commitment to our department, our university and our region. Last month, Seattle Business magazine named him its 2016 Tech Impact Champion for his achievements and advocacy on behalf of the local tech community.