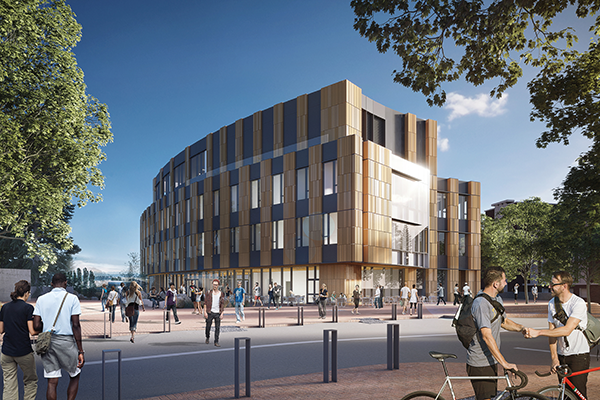 The UW Board of Regents today approved the immediate start of construction on a second building that will accommodate a significant expansion of CSE. The building – slated to open in two years – will occupy a site across Stevens Way from the existing Paul G. Allen Center for Computer Science & Engineering on UW’s Seattle campus.

Today’s action by the Regents is the culmination of a multi-year effort on the part of leaders from the University, state government, the local technology community, and a multitude of friends and alumni to support CSE’s expansion in response to skyrocketing student and employer demand. The State of Washington provided $32.5 million to launch the project. Microsoft kicked off the private fundraising campaign in June 2015 with a $10 million donation (since increased to $20 million). Amazon, Zillow, Google, and more than 100 individuals have joined since then. At present more than $90 million has been committed toward a total project cost of $110 million.

Design of the 135,000-square foot facility – by Seattle’s LMN Architects, designers of the Allen Center – is complete. Mortensen Construction is the general contractor. (Mortenson also oversaw construction of the Allen Center.) In addressing the Board of Regents this morning, CSE’s Ed Lazowska emphasized this continuity, saying “This is the same project team that 15 years ago brought the Paul G. Allen Center in on-time and under-budget: the same architect, the same general contractor, the same Computer Science & Engineering project team, the same UW construction manager, and the same fundraising team. We have done this before. You can have confidence that we will be able to do it again.” Lazowska was effusive in his thanks to UW’s leadership and the Seattle tech community for their support of the project, saying “Being in this community is heartwarming – the way people pull together to make things like this happen.”

Learn more about the project here, and view our image gallery here.

Thank you to all who have believed in and supported CSE2 up to this point – we could not have reached this milestone without you! Onward and upward!

Published by Kristin Osborne on January 12, 2017