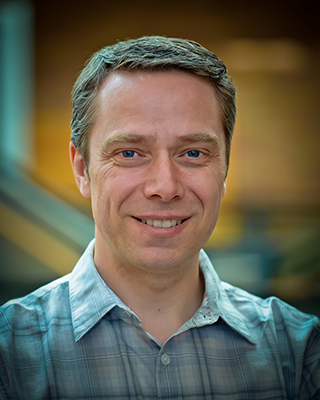 Professor Dieter Fox of UW CSE’s Robotics and State Estimation Lab has been recognized by the Association for the Advancement of Artificial Intelligence with the 2017 AAAI Classic Paper Award. Fox shares the award for the 1999 paper “Monte Carlo Localization: Efficient Position Estimation for Mobile Robots” with co-authors Wolfram Burgard, Frank Dellaert and Sebastian Thrun.

The AAAI Classic Paper Award honors authors of the conference paper deemed to have been the most influential within the field of artificial intelligence from a chosen year. This is the second year in a row that Fox has earned the award, having been recognized in 2016 for “The Interactive Museum Tour-Guide Robot” originally presented at AAAI-98.

The latest winning paper, co-authored by Fox when he was a postdoc at Carnegie Mellon University, introduced a new, sample-based algorithm for mobile robot localization called Monte Carlo Localization (MCL). MCL uses randomized samples to represent a robot’s belief about its location in an environment and is notable for its accuracy, efficiency, and ease of use compared to previous approaches. MCL was the first application of sample-based estimation in robotics, where it is now used across a wide range of applications.

In their paper, Fox and his colleagues thoroughly tested MCL with multiple robots equipped with different kinds of sensors, including Minerva, a robot operating as a tour guide in the Smithsonian Museum of Natural History. These experiments revealed MCL to have several advantages over what were then considered the best localization techniques. For example, MCL’s adaptive sampling yielded far more efficient and accurate results than grid-based Markov localization — at the time presumed to be the state of the art localization technique — and in some cases succeeded in reliably localizing a robot where grid-based localization failed. It was also easier to implement than past techniques: instead of having to reason about entire probability distributions, MCL randomly guesses possible positions in a way that favors likely positions over unlikely ones, and adjusts the number of samples in proportion to the amount of surprise in the sensor data.

Fox and his co-authors will be formally recognized at the AAAI-17 conference in San Francisco, California next month.

Published by Kristin Osborne on January 20, 2017