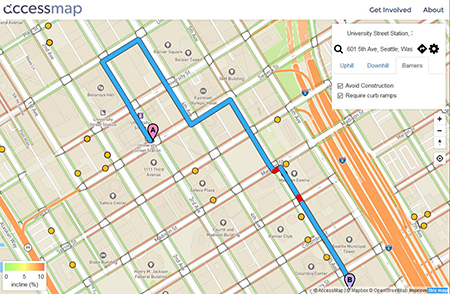 This week a team of researchers working with UW CSE’s Taskar Center for Accessible Technology rolled out an online travel planner, AccessMap, which enables people to easily map out accessible or pedestrian-friendly routes for getting around Seattle. AccessMap’s customizable routing includes information on gradient, curb ramps, and closures due to construction — features that will make navigating the city easier for all users, including travelers with luggage, parents with strollers, delivery drivers, and people who rely on assistive devices.

“The big highlight now is our ability to offer automated routing and accessible travel planning for Seattle residents who may have mobility challenges or may simply want to find the easiest way to navigate a neighborhood,” Taskar Center director Anat Caspi told UW News. “Identifying routes that optimize not for time or distance but for things like changes in elevation and curb cuts is a really big and important change.”

The group of researchers behind AccessMap is also working on OpenSidewalks, a project that aims to create a set of standards and tools to encourage users in Seattle and elsewhere to crowdsource detailed information about real-world pedestrian conditions in their communities. OpenSidewalks is partnering with the City of Seattle and Seattle Public Schools on the Safe Route to Schools initiative to encourage students to walk and cycle to school — and to be citizen scientists by contributing their own real-world observations along their routes.

“We hope to be able to crowdsource all kinds of information that relates to accessibility,” said technical lead Nick Bolten, a Ph.D. student in Electrical Engineering. “Our goal is to have a set of toolkits and instructions so other municipalities…can get their own mapping efforts up and running.”

The AccessMap team won the 2015 Hack the Commute competition organized by the City of Seattle and also participated in the eScience Institute’s Data Science for Social Good summer program.