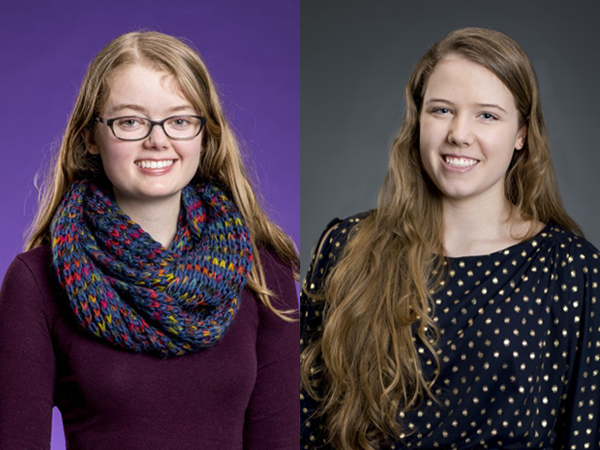 Allen School undergraduates Camille Birch and Kelsie Haakenson have been selected as members of the 2017 class of the Husky 100. The Husky 100 program recognizes students from across the three UW campuses who are making the most of their Husky experience while making a difference on campus and in their communities through discovery, leadership, and a commitment to inclusivity.

Camille Birch is a senior from Woodinville, WA pursuing degrees in bioengineering and computer science. After developing an interest in neuroscience as a freshman, she joined UW Physiology & Biophysics professor Eberhard Fetz’s lab as an undergraduate researcher focused on brain-computer interfaces and functional connectivity. Birch has earned a number of awards for her work, including a Washington Research Foundation Innovation Fellowship from the UW Institute for Neuroengineering. She also was named a Levinson Emerging Scholar for her research in cross-cortical connectivity and prefrontal cortex control of brain-computer interfaces using the NeuroChip-3.

In addition to her passion for research, Birch is committed to fostering inclusivity in her chosen fields, guided by the belief that “the scientific community should be as diverse as the communities for which we do research.” After completing her bachelor’s, Birch plans to enroll in an M.D./Ph.D. program in neural engineering in the hopes of using her research to advance rehabilitative medicine.

Kelsie Haakenson, also from Woodinville, is a senior double-majoring in history and computer science with a minor in French. Computer science didn’t factor into her plans when she first arrived at UW. But after working as an intern on the Newbook Digital Texts project and teaching herself the Python programming language, Haakenson decided to combine her love of the humanities and newfound interest in computer science. Since then, she applied and was accepted into the Allen School, spent a semester polishing her language skills at the Université de Nantes in France, and completed software engineering internships at Adobe and Socrata.

“Throughout my education, I have connected the dots between my studies and experiences, be it my research in history, projects in computer science, or language studies in French,” Haakenson said. After graduation, she hopes to pursue a career in digital history and make primary sources — like those she worked with as part of the Newbook Digital Texts project — accessible to more people through online publishing.