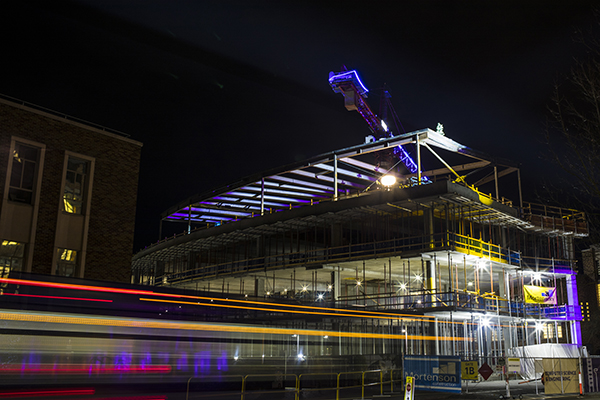 Nearly 300 members of the Allen School’s extended community gathered earlier this month to celebrate two exciting milestones for the new Bill & Melinda Gates Center for Computer Science & Engineering currently under construction across the street from the Paul G. Allen Center: the “topping out” of the steel structure, and the conclusion of fundraising for the project thanks to a $15 million gift from Bill and Melinda Gates. With this step completed, the Allen School is now able to shift the focus of its fundraising efforts from building bricks and mortar to building support for the students and faculty who will use the center as a springboard for creativity, innovation, and global impact.

The topping out was marked by the ceremonial hoisting of the final steel beam, which faculty, staff, and supporters were invited to sign throughout the day. After adding their own signatures to the beam, the Gateses joined fellow special guests UW President Ana Mari Cauce and Microsoft President Brad Smith onstage. 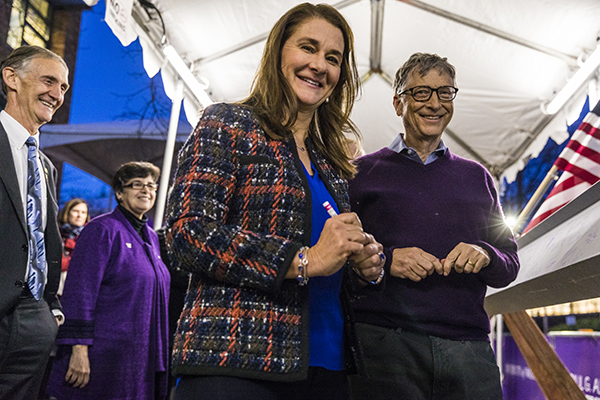 Melinda Gates recounted for the audience the couple’s surprise and delight when, in the midst of discussing making a building gift of their own, they discovered that more than two dozen of their longtime friends and colleagues had banded together with Microsoft to provide a naming gift in their honor.

“That was a really, really special day for us, and we really appreciated that,” she said. “We couldn’t be more proud to have our names on the building.

“Sometimes, when you agree to a gift, you have to push people in a certain direction,” she continued. “This is a case where because of the work that Ed Lazowska has done and Hank Levy to make sure there are multiple and many pathways for young women and minorities into computer science, we don’t have to do anything except be along for the ride.”

Bill Gates recalled the early days of Microsoft, back when the company numbered 15 employees, and how his hopes for the company and for UW were intertwined. 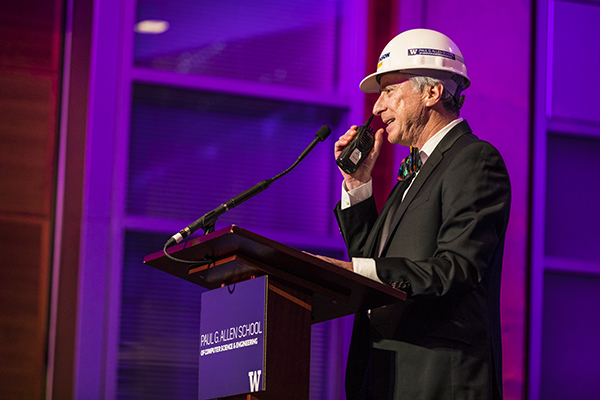 “We had big ambitions, so we were hoping that the university would grow along with us — that its size and its ranking would make it the best in the world,” he said. “And in fact, that’s exactly what’s happened.

At Allen School Director Hank Levy’s signal — “Okay, Mortenson, beam us up!” — the beam began its ascent to the top of the structure. The beam would later be welded into place, enabling work on the building’s enclosure and interior to begin. The Bill & Melinda Gates Center is slated for completion by the end of 2018 and will be ready for occupancy in early 2019.

Read an excellent recap of the topping out celebration on GeekWire here, and a related UW News release here. See below for a video of the beam-raising and more photos of the evening’s festivities.

We are grateful to our generous donors and friends whose leadership and support over the past several years have made this day possible. We look forward to sharing many exciting and inspiring stories about the faculty and students who will benefit from the building that you helped build! 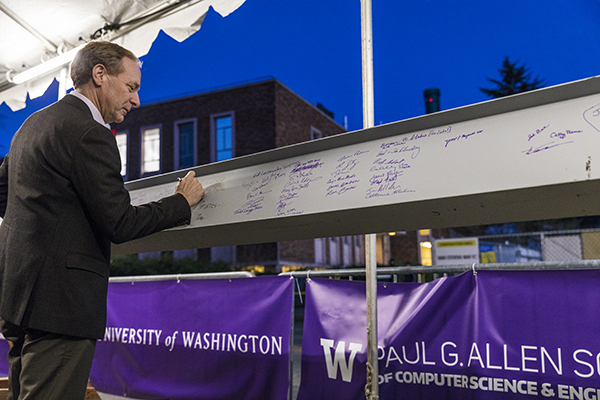 Brad Smith, who spearheaded the fundraising campaign, signs the beam 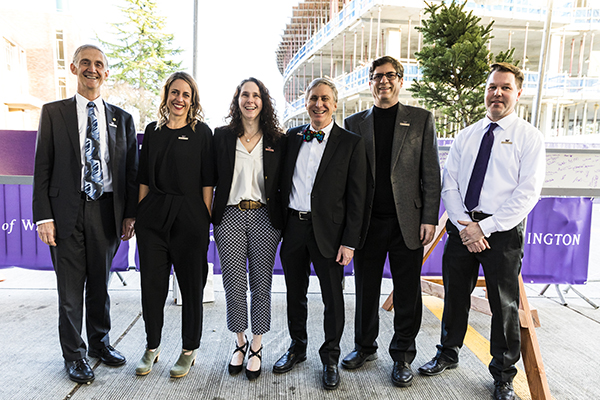 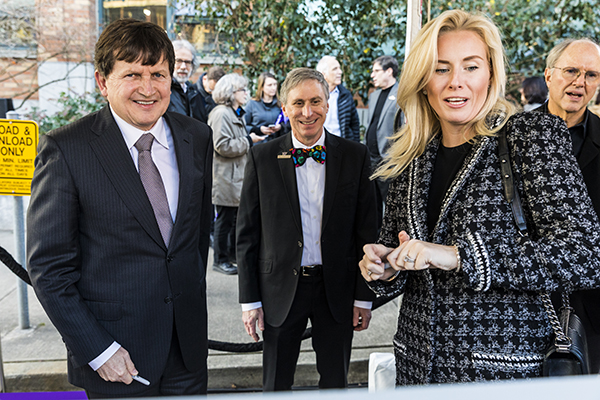 Charles Simonyi (left) and Lisa Simonyi (right), who co-led the effort to name the building in honor of the Gateses, sign the beam as Hank Levy looks on 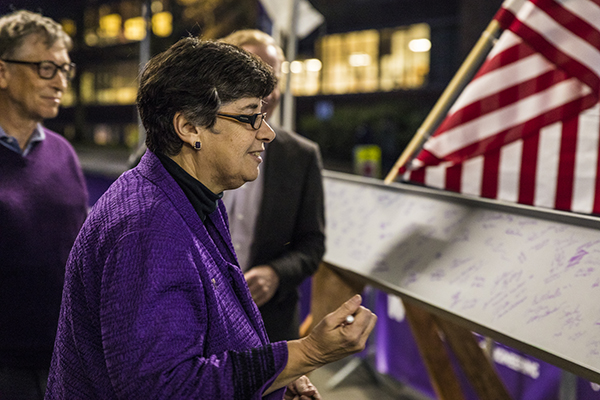 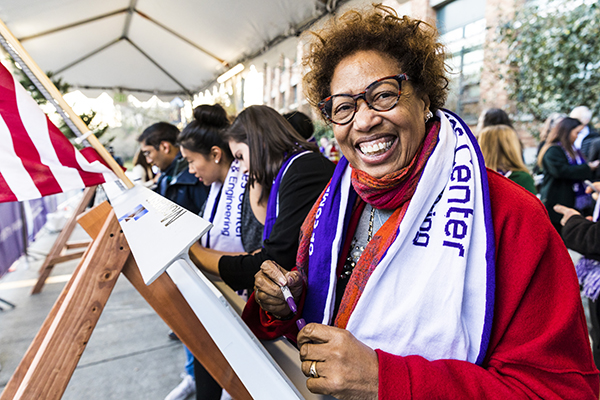 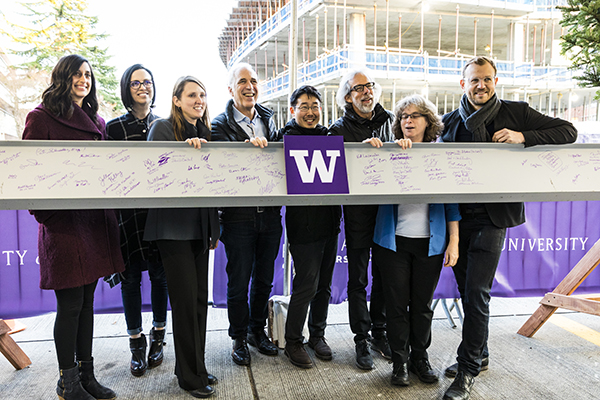 The team from LMN Architects, which designed the Bill & Melinda Gates Center, pose with the beam 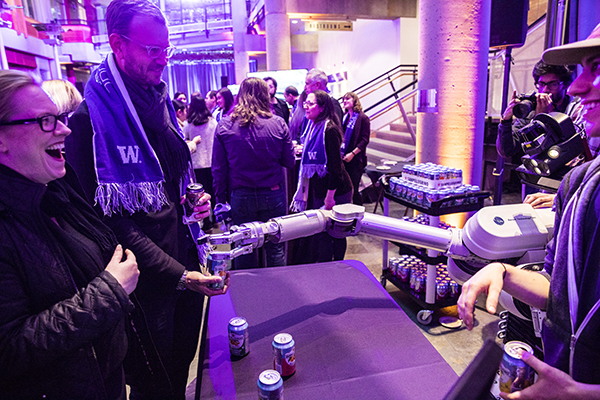 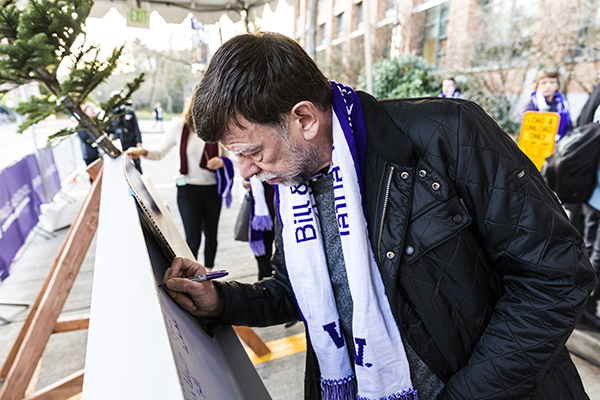 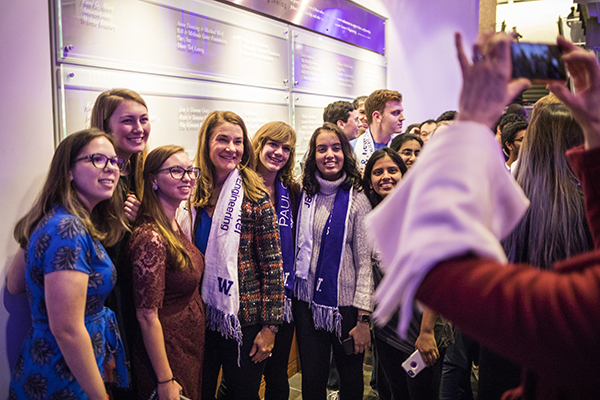 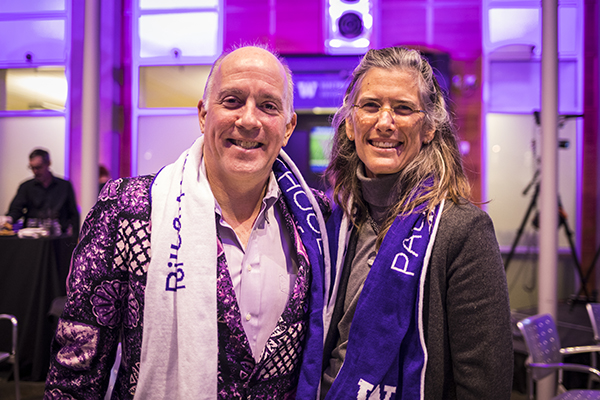 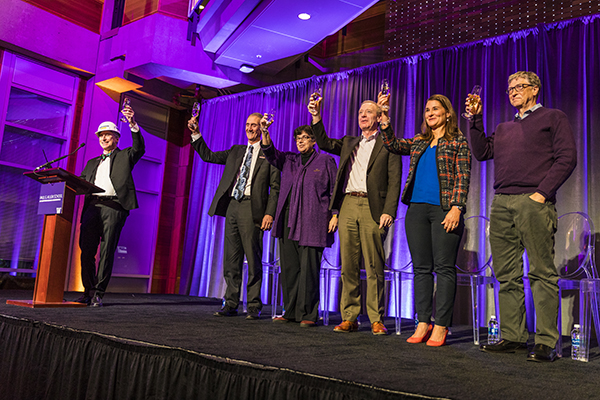 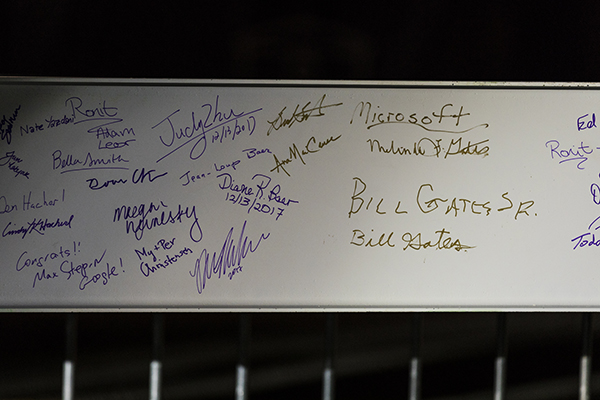