On Saturday, Allen School Ph.D. student Galen Weld, his twin brother Adam, his father (and Allen School professor) Dan, and his mom Margaret Rosenfeld reached the 8,528-foot summit of Buck Mountain in the Glacier Peak Wilderness. With that achievement, Galen became the youngest person to summit each of the 100 highest peaks in Washington, and Dan and Galen became the first father-son team to achieve this milestone. (Dan completed his summit of Washington’s “Top 100” in 2016.)

The Paul G. Allen School of Computer Science & Engineering is proud to participate in this weekend’s tribute to Mr. Allen. We re-commit ourselves to fulfilling his vision. 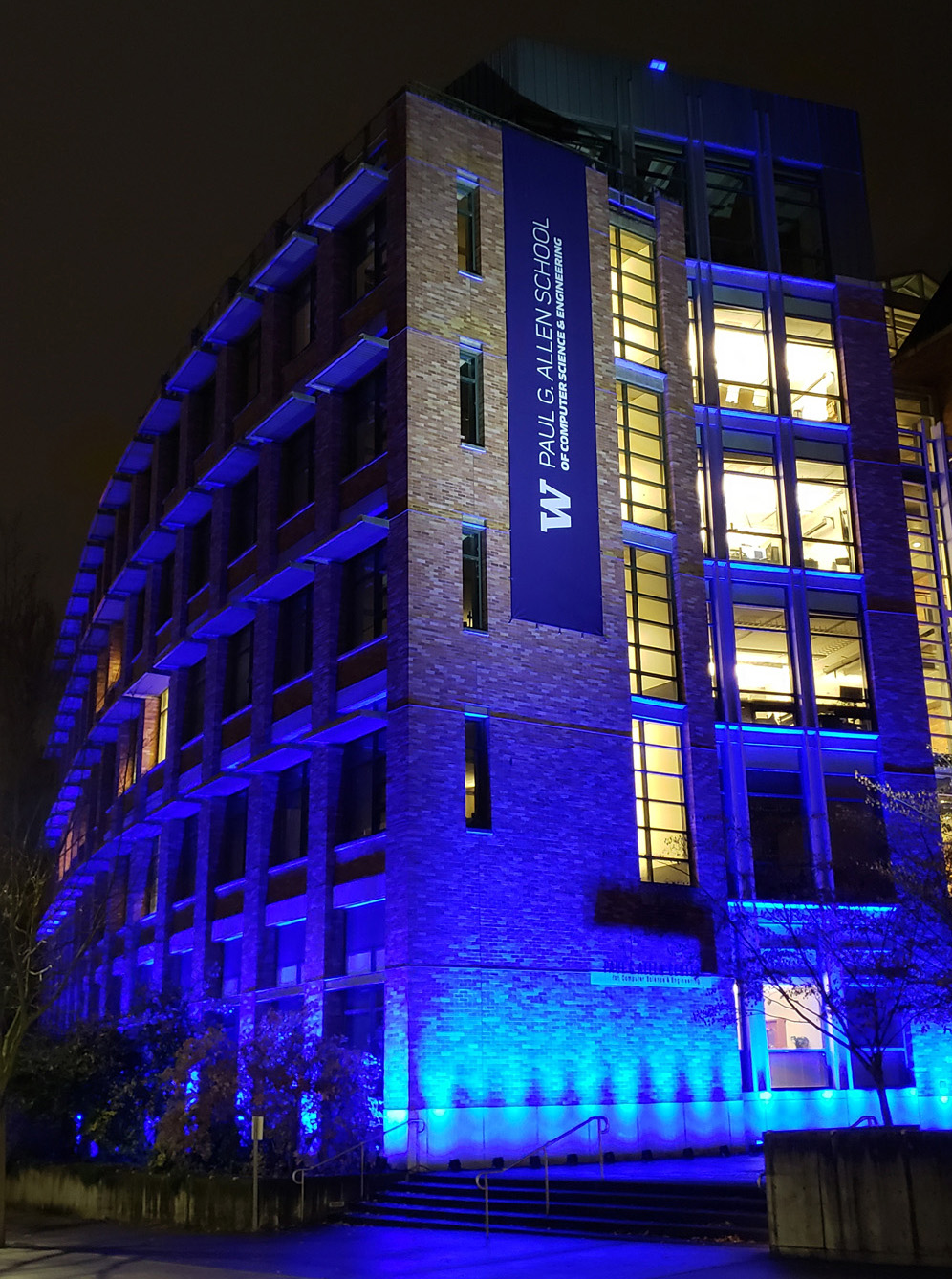 Thanks to the trades who are making the Gates Center a reality! 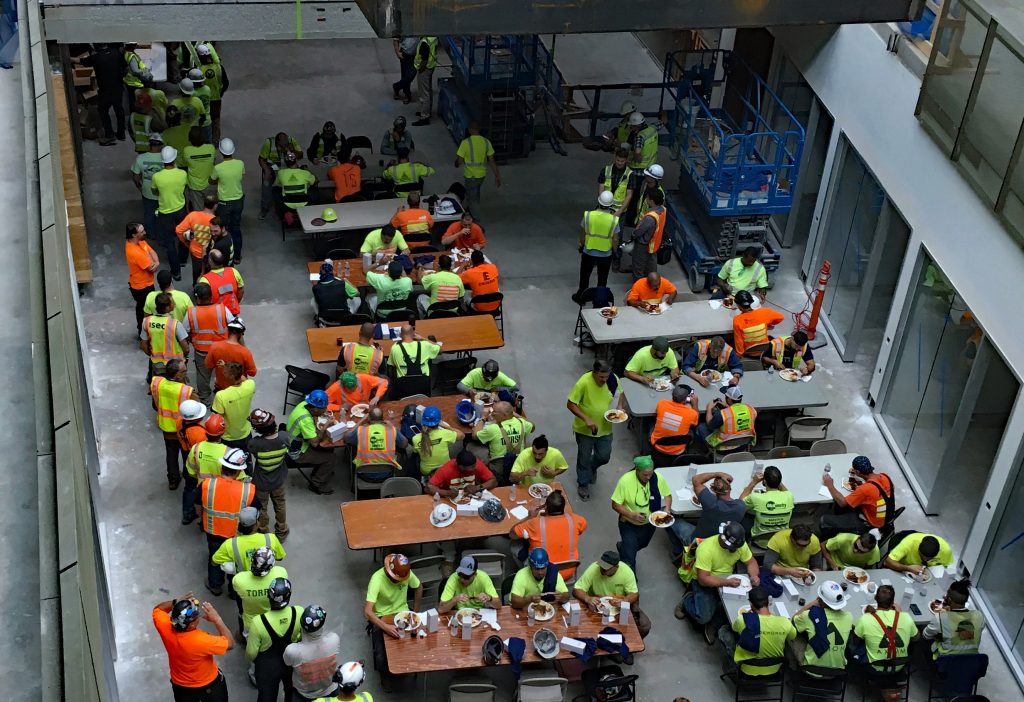 On a typical day nearly 150 tradesmen and tradeswomen are at work on the Bill & Melinda Gates Center for Computer Science & Engineering. Every day we marvel their amazing work, and periodically we demonstrate it with a bbq lunch and special recognition for some folks who have gone above and beyond in contributing to the great culture of the team.

Today’s event was particularly special: the first event held in the atrium of the Gates Center.

Thank you Mortenson and all your subs and their people – you’re the best! And thank you LMN for an incredible design. 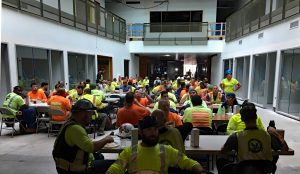 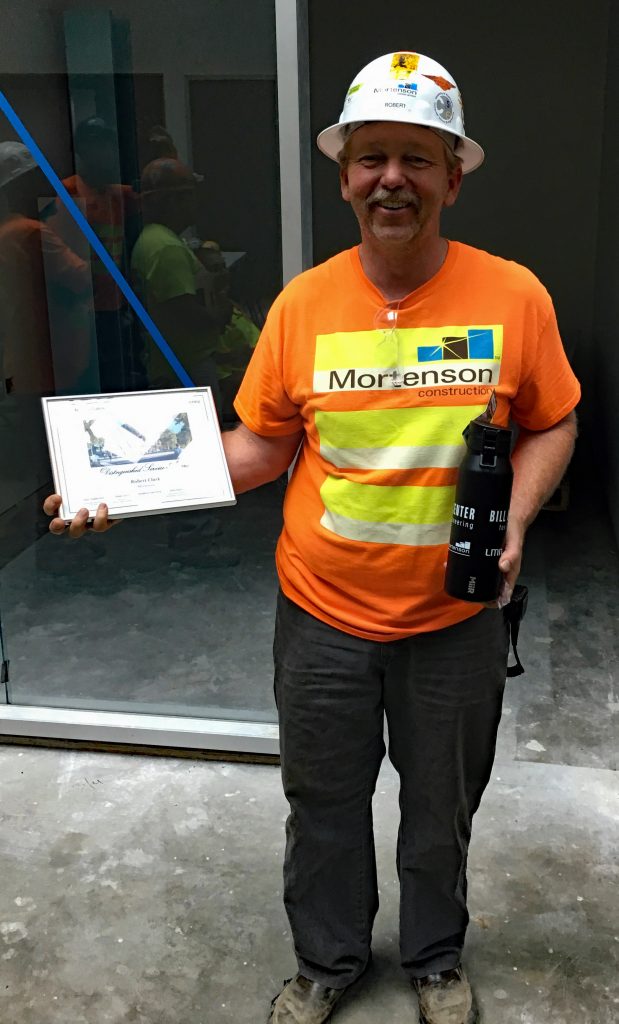 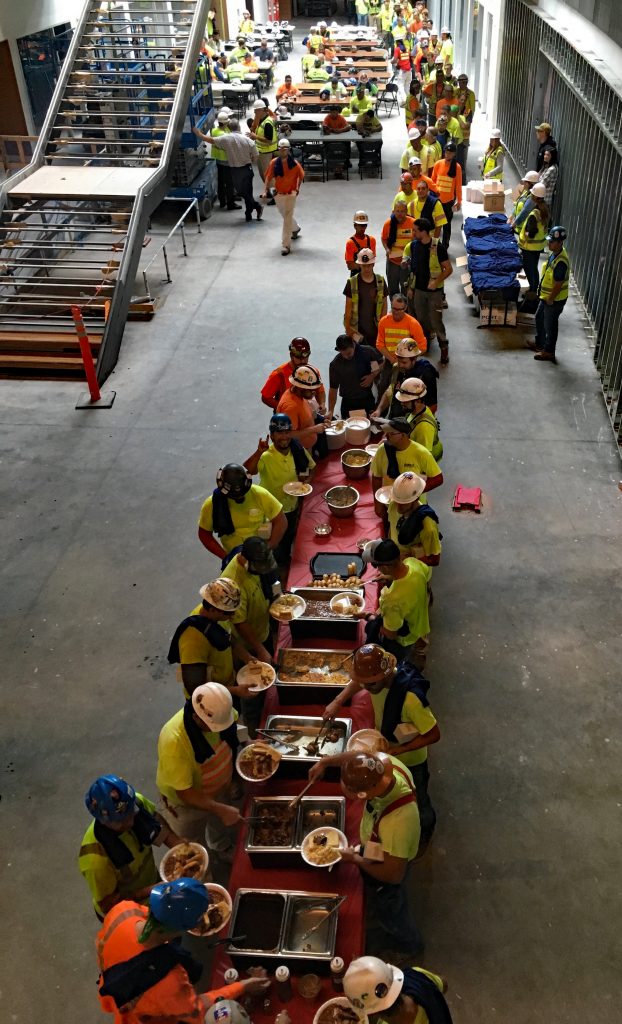 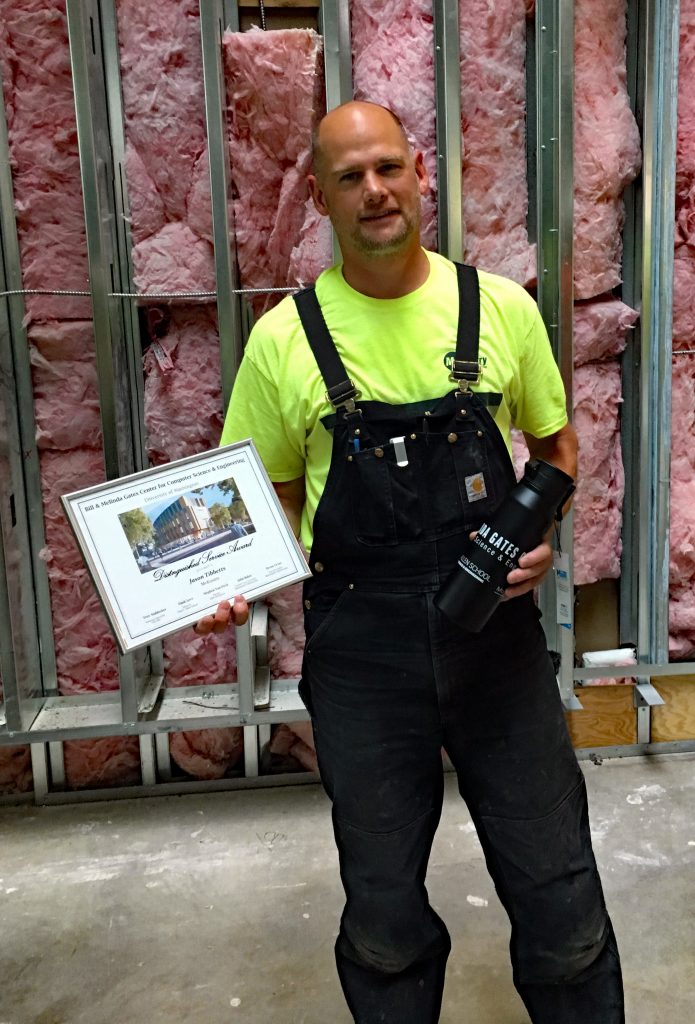 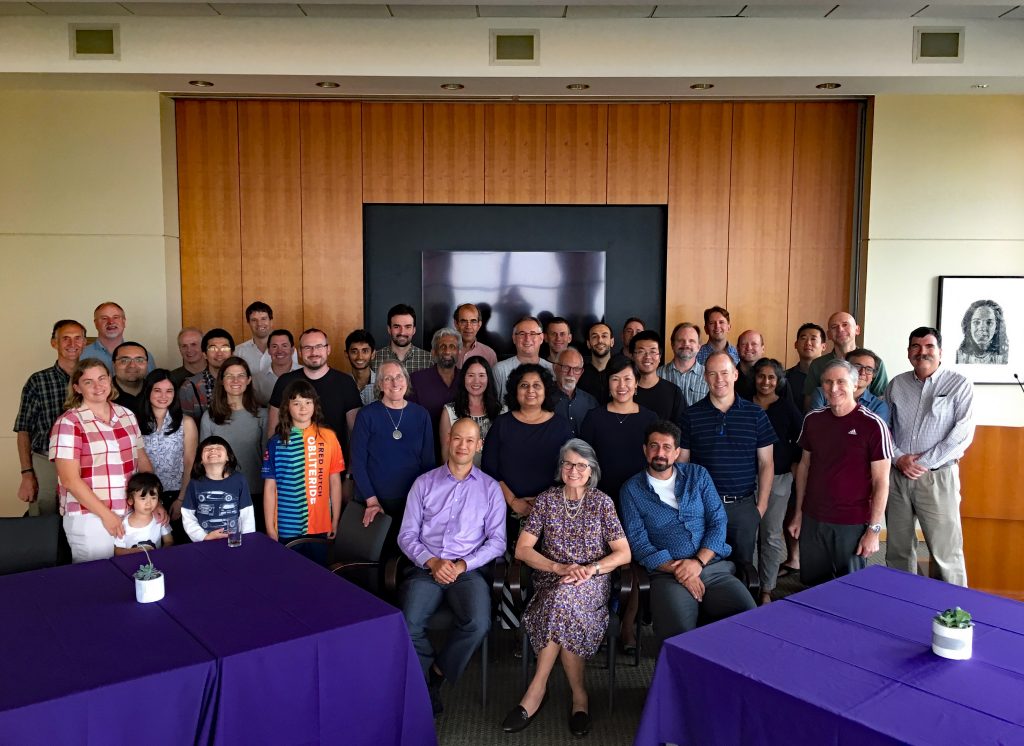 This afternoon we celebrated an unprecedented clean sweep of the major awards at the International Symposium on Computer Architecture.

Hadi Esmaeilzadeh, UW Paul G. Allen School Ph.D. alumnus and UCSD CSE faculty member, received the Young Computer Architect Award from the IEEE Technical Committee on Computer Architecture, given annually to an individual who has completed his/her Ph.D. degree within the last 6 years and has made one or more outstanding, innovative research contributions. Hadi was honored “in recognition of outstanding contributions to novel computer architectures in emerging domains, especially in machine learning and approximate computing.”

Gabe Loh, Fellow Design Engineer with AMD Research in Seattle, received the ACM SIGARCH Maurice Wilkes Award, given annually for an outstanding contribution to computer architecture made by an individual whose computer-related professional career started no earlier than 20 years prior to the year of the award. Gabe was honored “for outstanding contributions to the advancement of die-stacked architectures.”

Another indication of Seattle’s emergence as a center of information technology innovation. 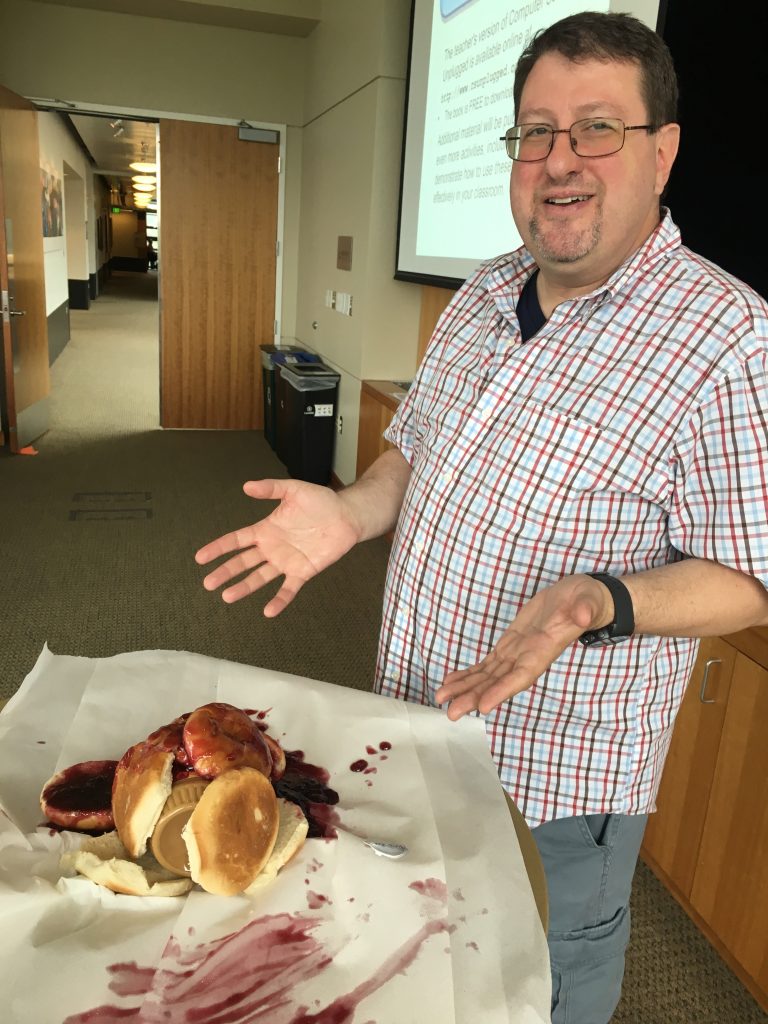 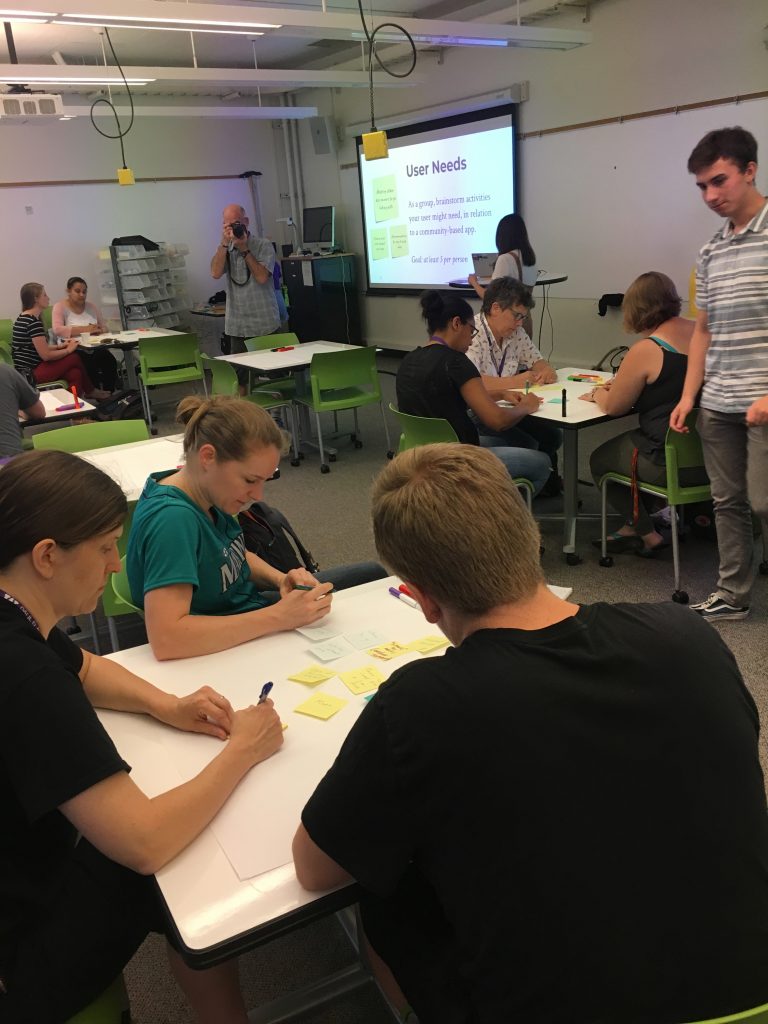 Students from Human Centered Design and Engineering lead the teachers through a design exercise.

Last week marked the Allen School’s annual workshop for middle school and upper school teachers of math and science – CS4HS. Learn more here. And plan to join us next year! 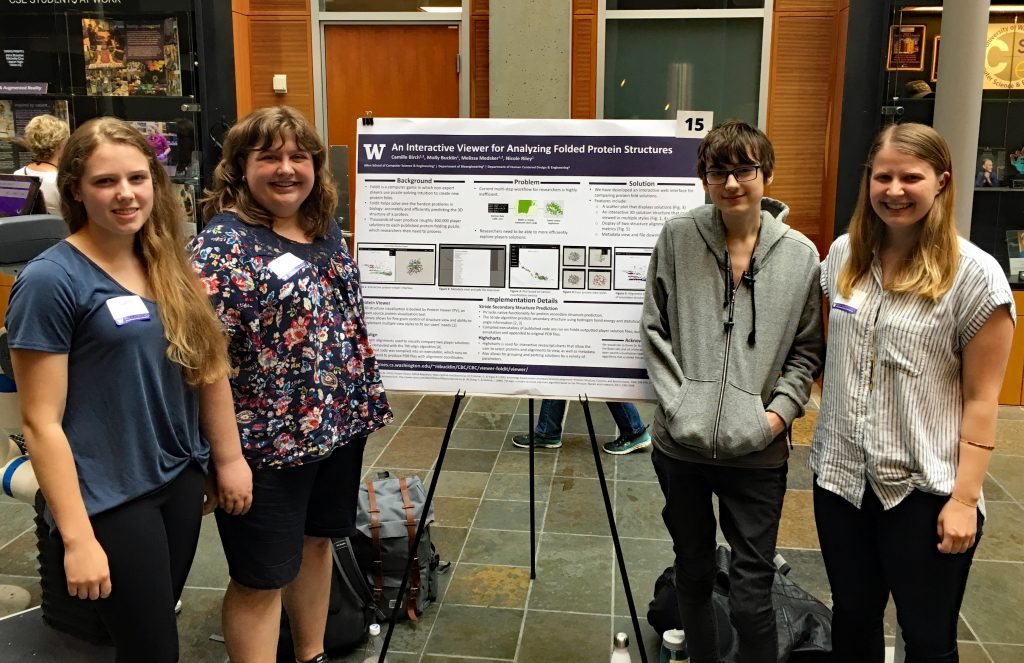 Many thanks to the alums who joined us this evening to view a collection of undergraduate research projects. And congratulations to the students behind the project judged first among many outstanding projects: Camille Birch, Nicole Riley, Melissa Medsker, and Molly Bucklin for their project “An Interactive Viewer for Analyzing Folded Protein Structures,” advised by professor Larry Ruzzo. 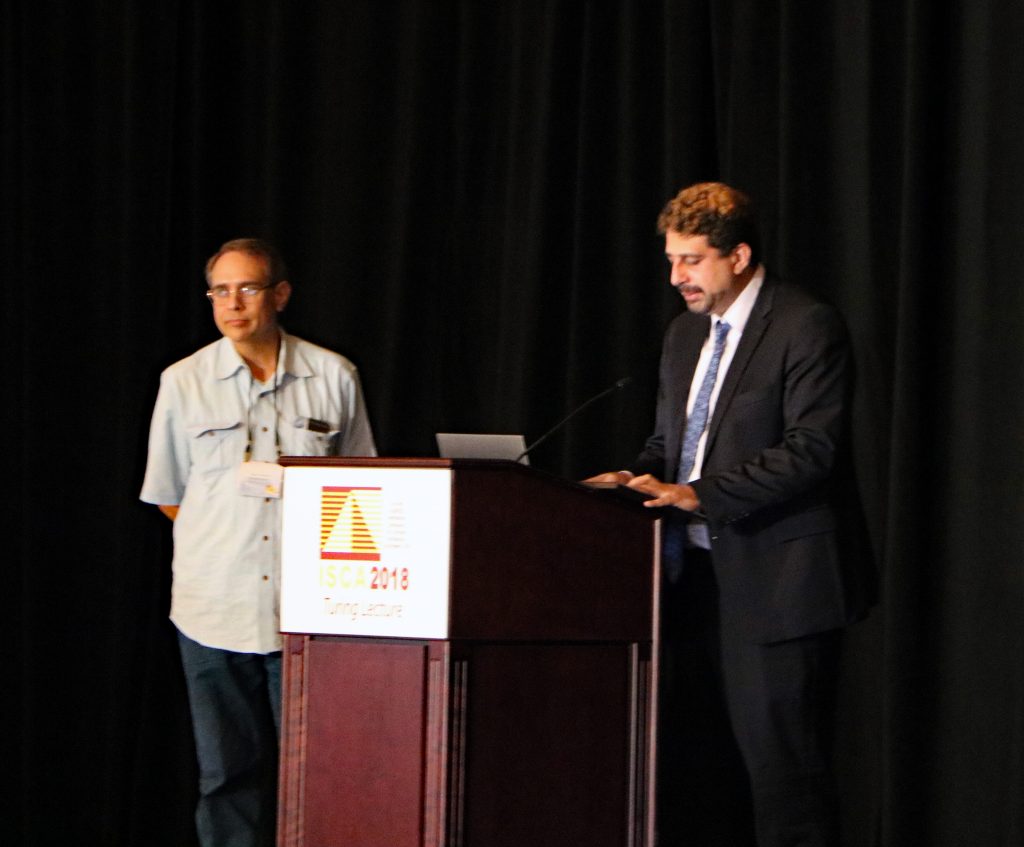 The award, which is open to any individual who has completed his/her Ph.D. degree within the last 6 years, recognizes outstanding early-career research contributions in the field of Computer Architecture.

Hadi began his graduate studies at the University of Texas at Austin, advised Doug Burger. When Doug moved to Microsoft Research, Hadi transferred to the University of Washington, where he was co-advised by Doug and Luis Ceze. In the year of his graduation, he received the William Chan Memorial Dissertation Award for the top dissertation in the Allen School.

It was a great day for the Allen School at ISCA: in addition to Hadi’s recognition, Susan Eggers received the IEEE/ACM Eckert-Mauchly Award, the computer architecture community’s most prestigious honor.

“Celebration with the STARS” 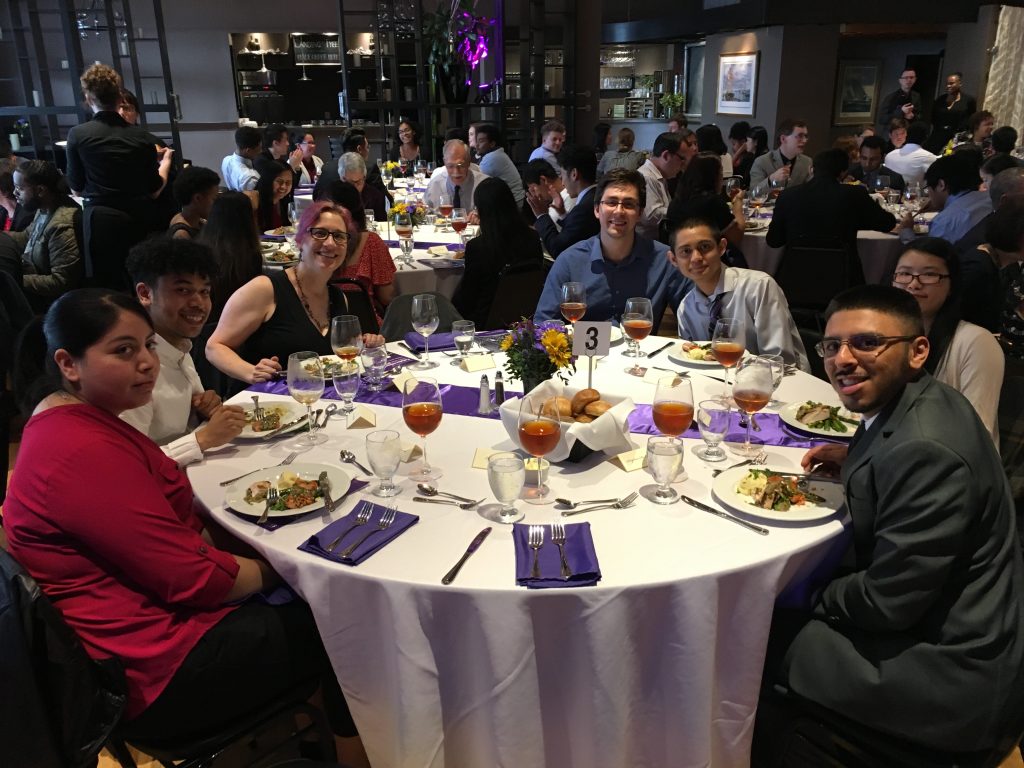 Tonight marked the fifth annual “Celebration with the STARS” banquet, and the graduation from UW of the first cohort of STARS students. 30% of the graduates are Allen School students – and 39% of the newest (fifth) cohort are headed for the Allen School!

Thank you to our state legislators! 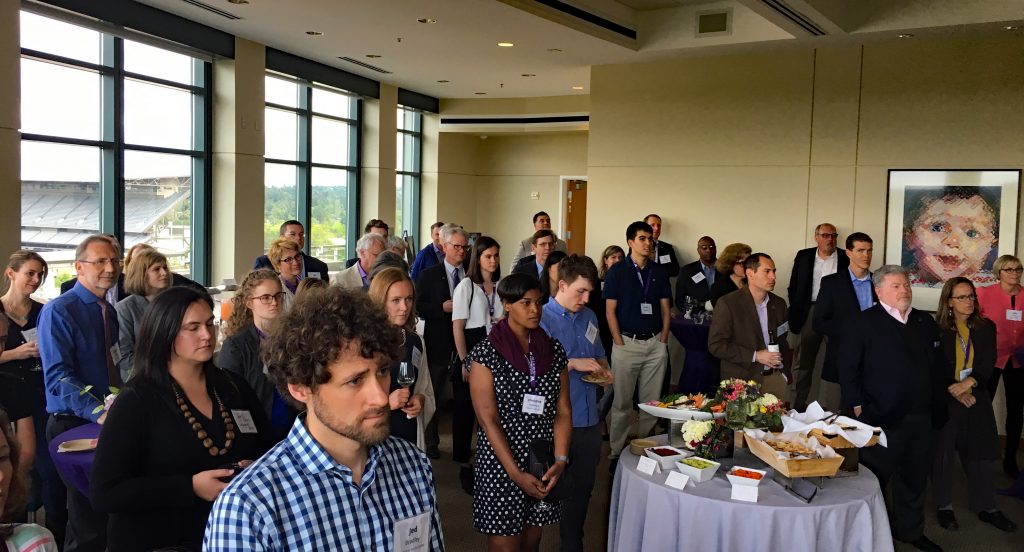 On Thursday the Paul G. Allen School was honored to host UW’s annual reception thanking our state legislators for their investments in education.

In the case of the Allen School, recent investments include substantial support for the Bill & Melinda Gates Center – a second building that will double our space when it opens in January – and multiple years of funding for enrollment growth that have more than doubled our degree capacity. Learn more here.

In addition to state legislators and members of the Governor’s staff, attendees included UW’s Board of Regents and academic leadership, Allen School faculty and students, and representatives from Fenologica, Microsoft, Moz, Real, Tableau, Zillow, and the Washington Tech Industry Association who attended to demonstrate the importance to the region’s tech industry of investments in the Allen School. 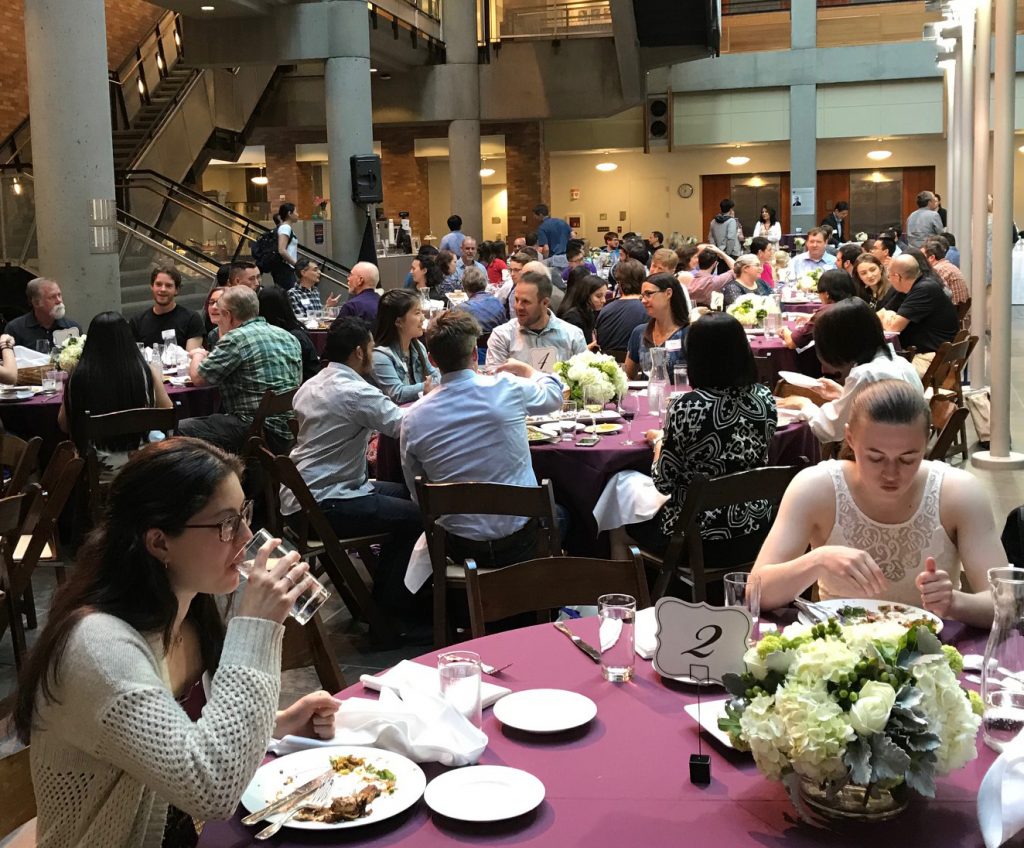 Every year, we in the Paul G. Allen School invite our new majors to identify their most inspirational high school or community college teacher – the teacher (each of us had one!) who changed their perception of what they should aspire to. We host these teachers, their partners, and the students who nominated them for dinner in the Allen Center (plus a bit of propaganda designed to encourage the teachers to send us more great students!).

Congratulations and thanks to the Paul G. Allen School’s 2017-18 Inspirational Teachers – nominated by our students for the difference you’ve made in their lives. The wordcloud from the nomination statements submitted by our students says it all: inspirational, approachable, passionate, supportive, encouraging, helpful, empowering … 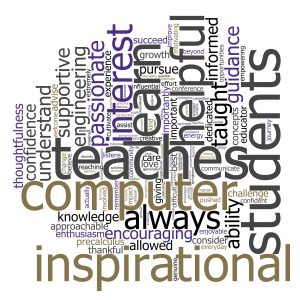 And special congratulations to Sam Procopio, the inaugural recipient of the Paul G. Allen School’s Award for Broadening Participation in Computing. Sam – regularly recognized as an Inspirational Teacher – sent 34 young women to our program during his 9 years of teaching computer science (and coaching soccer) at Holy Names Academy. This year he began a new phase of his career as Principal at Bishop Blanchet High School, from which he graduated in the previous century.

From early learning through graduate school, all educators are in the same business. Parents entrust us with their most precious asset – their children. We do our best to help these young people achieve their potential. When they excel – which is almost always, given the amazing raw material with which we are entrusted – we take pleasure in the fact that we’ve played at least some small role in that success. 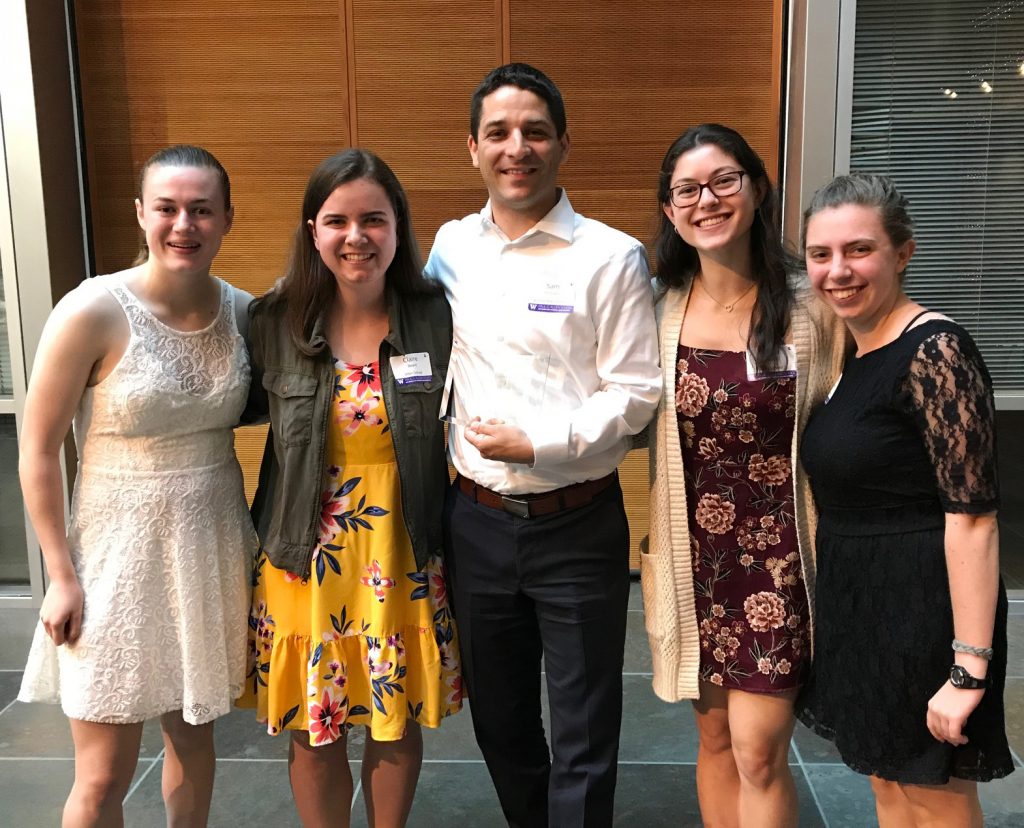