Congratulations – yet again – to Shwetak Patel 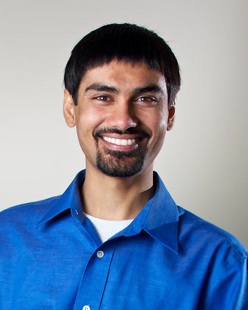 Shwetak Patel has been appointed as the Washington Research Foundation Entrepreneurship Endowed Professor of Computer Science & Engineering and Electrical Engineering.

Shwetak’s research interests are in the areas of Human-Computer Interaction, Ubiquitous Computing, Sensor-Enabled Embedded Systems, and User Interface Software and Technology. He is particularly interested in developing new sensing technologies with an emphasis on energy monitoring and health applications for the home.

He was a founder of Zensi, Inc., a residential energy monitoring company, which was acquired by Belkin, Inc. in 2010. He is also a co-founder of SNUPI Technologies, a low-power wireless sensor company. He is the recipient of a MacArthur Fellowship (2011), Microsoft Research Faculty Fellowship (2011), Sloan Research Fellowship (2012), TR-35 Award (2009), World Economic Forum Young Global Scientist Award (2013), and an NSF CAREER Award (2013). He was named Top Innovator of the Year by Seattle Business Magazine, and Newsmaker of the Year by Seattle Business Journal in 2011. Earlier work was also honored by the New York Times as a top technology of the year in 2005. He is a member of the World Economic Forum’s Global Shapers Community, and was selected as a Seattle Shaper in 2012.

Congratulations, Shwetak. And many thanks to our friends at the Washington Research Foundation – WRF has supported UW CSE and UW as a whole in so many ways over so many years! 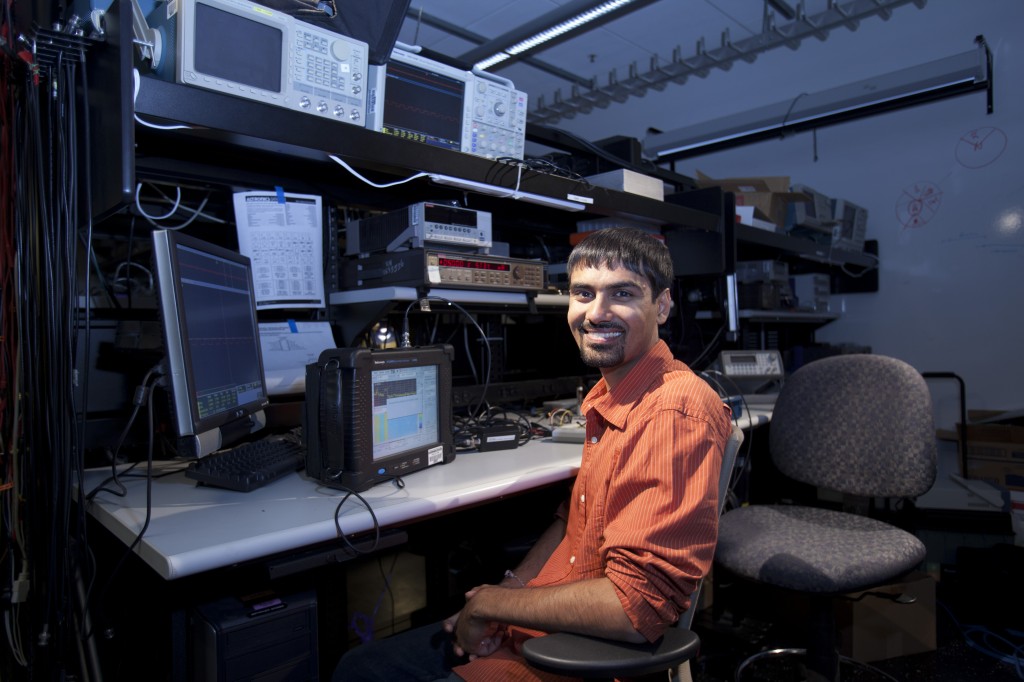 “For every variation in sound, pressure, temperature or electromagnetic wave, Shwetak Patel sees an opportunity. He is the master of white noise, the enemy of inefficiency. He made a name for himself with ElectriSense, a home energy monitor that reads noise to tell you how much electricity is used by each lightbulb and appliance in real time. But ElectriSense is only the beginning; there are no limits to what he and his lab might achieve.

“What drives Patel is not what can be achieved. It’s what should be achieved. And with a mind as sharp and creative as his, the ‘what ifs’ are endless: What if an app could distinguish between the sound of a regular cough and the cough of someone with Tuberculosis?

“What if you could use sonar to turn any surface (even mid-air) into a touchscreen for your device?

“What if doctors could replace a $10,000 machine with a prescription app (the first of its kind) to measure lung capacity and assess pulmonary issues at home?

“And what if a battery could charge itself by using slight variations in room temperature?

“These are just four of the more than 20 projects Patel’s lab, the University of Washington’s Ubiquitous Computation or UbiComp Lab, is currently working on.” The Computing Community Consortium has entered a video featuring UW CSE+EE professor Shwetak Patel and his students in the National Academy of Engineering’s “Engineering For You” video contest – a contest designed to surface inspirational engineering-0riented videos as part of NAE’s 50th Anniversary celebration.

(Thanks to the Computing Community Consortium and to videographer Patrick Sammon!)

Shwetak Patel, Dave Eaton in Seattle Times on “Why Tesla?” “‘We’re subsidizing the future car,’ said Shwetak Patel … He never thought he’s spend so much on a car, but that was never the only thing they were buying.” 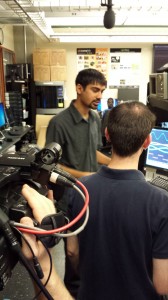 The Computing Community Consortium (CCC) is releasing the third segment in its Computing Research in Action Series.   This segment features the Ubiquitous Computing (UbiComp) research lab, led by Professor Shwetak Patel, at the University of Washington. The UbiComp lab, which consists of an interdisciplinary team of students, focuses on solving interesting and socially meaningful problems using a mix of hardware and software applications. The UbiComp lab focuses on four areas of ubiquitous computing: Photo of Shwetak that appeared in The Economist What better way to celebrate the formal receipt of tenure by UW CSE and EE professor Shwetak Patel than by surprising him with a simultaneous parody of his fashion sense and his MacArthur Foundation “Genius” Award?

(Thanks to Shwetak’s graduate students for organizing this nice prank!) UW CSE and EE professor Shwetak Patel is one of a number of Seattle-area innovators featured in displays at the Bezos Center for Innovation at Seattle’s Museum of History and Industry.

In connection with the dedication event for the Bezos Center for Innovation several weeks ago, Shwetak participated in an “Hour of Power” during which he posed provocative questions to Seattleites of all ages.

The newly-relocated and expanded MOHAI is spectacular – you should visit if you haven’t.  And in its Bezos Center for Innovation, you’ll see numerous references to Shwetak, Daniela Witten, and other extraordinary UW faculty members.

Friday October 11 and Saturday October 12 mark the dedication of the Bezos Center for Innovation at Seattle’s Museum of History and Industry (MOHAI).

Through interactive exhibits, community and educational programs, and first-person insights from leading innovators, the Bezos Center for Innovation explores Seattle’s role as a nexus of big ideas and new directions.

The dedication features a “Power Hour” (how can you not like that?) with CSE’s Shwetak Patel. See an interview conducted in connection with the dedication here. Other interviews of leading Seattle innovators here. Shwetak Patel – UW professor of CSE and EE, and Georgia Tech alumnus – was honored this week with an “Impact Award” commemorating the 20th Anniversary of Georgia Tech’s Graphics, Visualization, and Usability Center.

“Shwetak Patel … has been an Assistant Professor at the University of Washington since 2008, where he … holds a dual appointment in Electrical Engineering and Computer Science & Engineering, and he studies everything from low-power sensors to novel interaction techniques.  In 2011, Patel was recognized for is work by the MacArthur Foundation – the so-called ‘genius grant.'” “WatchFrog, which is in the process of raising cash, is building off of Patel’s research as well as the research of Duke University assistant professor Matt Reynolds and UW PhD student Gabe Cohn. The first engineers will start at the company October 1.

“Jaech tells GeekWire that WatchFrog’s ultra-low-power sensing technologies, currently in the prototype phase, could be used to monitor conditions around the home; and detect home hazards such as radon or carbon monoxide. The sensors are designed to last up to 50 years, far longer than other technologies.

“Jaech, who was just named to the Board of Regents at the UW, has been hanging around the computer science department at his alma mater for about a year.”